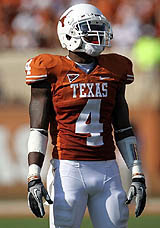 The show must go on.

Even as the NFL Lockout-related courtroom rulings fly, even as questions about the status of free agency run amok, and even as every NFL team disseminates nothing but rumors, innuendo and disinformation about their draft intentions and possible trades, the NFL Draft will begin this evening on prime-time TV.

What will the Steelers do? We have no idea. So much depends on what the 30 teams picking ahead of the Steelers in the first round do, and there could be several trades.

Everybody wants an offensive lineman, and there is much to be said for that. Despite the Steelers' woes on the O-line, Joey Porter's Pit Bulls has already posted this entry about this being not a great draft for offensive lineman. Ed Bouchette's column also notes how the Steelers typically pass over offensive tackles in the first couple rounds of the draft.

From everything we've seen, this is not the year for them to deviate from that approach (although if Wisconsin's Gabe Carimi somehow falls to them, we wouldn't squawk much if they took him). Max Starks and Willie Colon are the wild cards at the tackle position. If we had to wager, Starks will return; Colon won't. Of course, then, other free agents-to-be may or may not be available. New England's Matt Light, for example?

Now, more to the point -- not so much what they will do tonight, but what they should do, which is to draft a cornerback with the first pick, if the right one is available.

Joey Porter's Pit Bulls seriously disagree with the premise of Ed Bouchette's article in last Sunday's edition of the Pittsburgh Post-Gazette, titled, "Williams not the cornerback the Steelers need" about the University of Texas's Aaron Williams and cornerbacks in general.

Having watched (on TV, of course) Texas play a number of times the past three years, we couldn't help but notice Aaron Williams' play. He stood out as a playmaker and a difference-maker in top-flight competition. He was always around the ball, and a good tackler, very physical, with an explosive burst. He always seemed to be a legitimate problem for the opposition, which was always big-time (including bowl games).

We distinctly remember that No. 4, which is an unusual number for a cornerback, and thinking, "Who's that guy?" He jumped off the television screen over and over again. Although the rap against Williams seems to be he lacks top-end straight-line speed, Joey Porter's Pit Bulls would bet Williams is at least as fast as a lot of other NFL corners, including Bryant MacFadden and William Gay. And we still have nightmarish visions of MacFadden and Gay getting beat repeatedly in the Super Bowl.

If you get a chance to watch the NFL Network's program called "Game Changers," with Steve Mariucci, watch the segment featuring cornerbacks Prince Amakamura (whom everybody projects as a top-10 pick) and Aaron Williams. Based on what we saw in this program -- and, really, based on their body of work over their respective collegiate careers -- there is very, very little to distinguish the two.

On the show, Mariucci and the NFL Network's Charles Smith put Amakamura and Williams through on-field drills, talked to the two about technique, how and why they make certain moves in coverage, and how they play the ball in the air, etc. All this was covered in the film room, too, as they analyzed various plays in college, and Mariucci made Williams go up to the whiteboard, diagram play-schemes and explain what he would do on certain plays and why. Both Williams and Amakamura showed a deep understanding of what they are doing. They both showed that they are serious students of the game and serious about what they are doing. Both seemed very polite, respectful, complimentary of one another and fairly soft-spoken, but cool, loose and having fun, too.

On the field, both Amakamura and Williams are seriously quick, adroit and good with their feet (in turns, etc), and also with their hands (battling receivers off the line -- these days, it's almost like kung-fu hand-to-hand maneuvering for the first two steps until the receiver gets into his route, and then the corner shadows him, but also tries to force him out of his route with an "arm-bar" and by using the sideline as a friend to take away the angle.

Williams appears to be very good at reading the receiver, moving quickly, and turning smoothly. Speaking with Mariucci and Charles Smith, Williams also talked about the importance of maintaining inside-position, so he could make a play on the ball, and then Mariucci showed video of several highlight plays where Texas left Williams on an island, one-on-one with the other team's best receiver -- and expected him to make a play -- which he did.

On one such play, a red-zone fade route, the camera was shooting from the back corner of the end zone. The play developed right in front of the camera, and sure enough, Williams positioned himself inside the receiver, outmanevered him, leaped, twisted and picked off the ball at its highest point. Watching the interception, Amakamura said, "Incredible body control," and Mariucci said, "Amazing," after which Mariucci made the observation, "That receiver's taller than you, isn't he, that's probably why they figured he'd be a good target for the fade, that he'd outleap you." And Williams answered, "Yeah, he's 6'3"."

Joey Porter's Pit Bulls respect Ed Bouchette, but we don't like that Bouchette summarily dismissed Williams outright because of supposed lack of straight-line 40-yard dash speed and because the corner position supposedly can be filled later in the draft. Judging from his article, Bouchette hasn't talked to Williams' position coach in college, opposing college coaches, or NFL scouts (except one, the great Jack Butler, and who are we to argue with him?). BUT, if you read the article closely, Butler didn't say a word about Williams from an evaluative or observational perspective of technique, history or even his general ability to play corner. Butler talked about the relative comparison of playing safety vs. playing corner. Very general.

Keep in mind that Williams can play safety as well as corner, and keep in mind that the safety position in the NFL is changing -- has been for the past four or five years. Nowadays, coverage skills are more of a premium than they were in the days when you had a "free safety" and a "strong safety" -- a really big guy who hits big.

Safeties these days are more or less interchangeable AND they absolutely must have range, closing speed and coverage skills. If Williams transitions to safety (he's about 15-20 pounds heavier than Ryan Clark, by the way), we don't think that's necessarily a bad thing. And if he becomes a fixture at corner, all the better. He's solid as hell -- from the looks of him, he should play tough against the run -- and he sure doesn't shy away from contact.

After reading Bouchette's article -- and so much of the other constantly changing draft coverage, mock drafts, etc. -- we have no idea what the Steelers really might be thinking. There's so much disinformation any more. No team wants to tip their hand. All we know is the following: So much depends on what other teams might do ahead of the Steelers. People would like to see the Steelers draft Mike Pouncey (but he'll be gone), and we like what we've read about FSU's guard/center Rodney Hudson, but the Steelers may feel like they're okay on the interior of the offensive line with Maurkice Pouncey, Chris Keomatu, Ramon Foster, Doug Legursky and Trai Essex.

A defensive lineman could be a strong consideration, but the D-Line is supposed to be the deepest position in this year's draft, which means maybe you could get a very good player in the second or third round. Still, pass rushers are always at a premium, especially with so many teams converting to the three-four defense, and there's been a ton of speculation that as many as 13 defensive linemen/rushers could go in the first round.

We suspect the Steelers will target three positions in the first three rounds -- cornerback, defensive line and offensive line -- but, of course, it all depends how the chips fall. There are any number of guys we'd love to see in a Steelers uniform next year: Williams, Carimi, Pouncey, Hudson, J.J. Watt, Ryan Kerrigan, Brooks Reed -- even Eastern Washington running back Taiwan Jones (think Fast Willie) and Nevada QB Colin Kaepernick.

In fact, Joey Porter's Pit Bulls would LOVE for the Steelers to somehow grab Kaepernick, but we don't see it happening. He is likely to be drafted early to mid-second round. Just a feeling the guy not only has a ton of legitimate NFL-quality talent, but he also seems to have his head screwed on straight, since he says things like ...


"I feel like I’m a good person. I'm not going to put myself in a bad position or the team in a bad position with things I do off the field. That's what you look for when you're looking for a leader. Is this person responsible and mature enough to realize no matter what as a quarterback you are face of that franchise and you need to carry yourself a certain way? Certain things you can’t get away with."