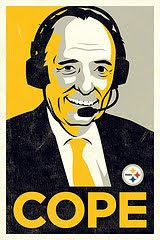 As Steelers' radio broadcaster and 14-year NFL veteran Tunch Ilkin said earlier in the week, "At this point, it's all conjunction."

The cliches have been clucked; the hyperbole has been hyped; the gauntlet (whatever medieval anachronism that is) has been thrown; the symbolic bets between mayors, radio personalities and bishops (bishops? Yes, bishops.) have been made; and the self-aggrandizing trash talk has been tossed.

Of course, ratbirds like Terrell Suggs, Baltimore linebacker, just had to chime in. Paraphrasing here, but not far off from what he said this week:

"Look at me! I'm the one wearing an insulting, profane tee-shirt!! That makes me bad! I'm the evil one! It'll be Armageddon!! World War III!!
Hey, Terrell, clown: Put the cuckoo back in the clock.

Then there was this, from ESPN broadcaster, former NFL great and "Dancing With the Stars" contestant Emmitt Smith with the breathless, obligatory Biblical reference:

"This game will be like two brothers fighting.
It'll be like Cain and Abel out there!"
Joey Porter's Pit Bulls have never seen Cain and Abel fight. We'll take Emmitt's word for it.

Again, to revisit Tunch's words of wisdom: "At this point it's all conjunction."

Surely, Myron Cope, up in Steeler heaven, must be as fidgety as can be. With a respectful nod to Myron, then, we'll leave the last word to him, always the voice of reason:

"Yoi, and double yoi!!
Let's kick it off already, for cryin' out loud!!!"
Additional Reading: