Ironic, isn't it? ... Secondary Considerations, and a Different Kind of Steeler Video 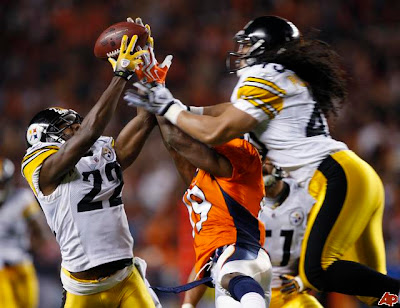 Ed Bouchette, the Steelers beat reporter for the Pittsburgh Post-Gazette, said today in a radio interview that Steeler cornerback William Gay (No. 22 in the photo above) will probably see a lot of playing time on Sunday.

NFL.com's Albert Breer reports that McFadden practiced for the first time on Friday. Breer also quoted McFadden as saying he "will see how he feels on Saturday before a decision is made about playing against the Jets."

That all sounds a bit iffy, but it also sounds like McFadden will see some playing time. Still, according to Bouchette, we can expect to see lots of William Gay, never mind that the Steelers' depth chart lists Anthony Madison as McFadden's backup, with the heretofore invisible Keenan Lewis listed as Madison's backup.

It was William Gay, however, who was on the field in critical situations late in the playoff game against the Baltimore Ravens -- and it was Gay who had coverage on T.J. Douchemandzadeh on the final, crucial 4th-and-18 pass that Houshmandzadeh dropped. (By the way, for anybody who cares, and that's nobody, Houshmandzadeh is no longer listed on the Ravens' roster on the team's official Web site -- he's a free agent -- but it took the team about as long to drop him as he took to drop that last pass, which was hardly any time at all.)

Back to our topic: After playing poorly as a starter during much of the 2009 season, William Gay played well this year in his role as nickel back, and he saw considerable playing time. Gay admitted earlier this season that he realized he had to pick up his game -- after all, the Steelers traded for McFadden for a reason.

It's coincidental -- or is it ironic? -- that the Steelers obtained McFadden from the Arizona Cardinals with the very same fifth-round draft choice they obtained from the New York Jets for, yup, you guessed it -- "Ding-ding-ding-ding!!!!" -- Santonio Holmes.

In effect, then, the Steelers traded Santonio Holmes for Bryant McFadden, who may (or may not) be lined up against Holmes in Sunday's AFC Championship Game.

Come to think of it, that is ironic.

And how ironic will it be if William Gay, who was relegated to backup duty by McFadden's return to the Steelers, is the one involved in key matchups with Holmes? Ach, we get ahead of ourselves.

Although Bouchette suggests the Steelers will assign Ike Taylor to shadow Holmes, we all know that teams mix-and-match a potpourri of coverage assignments every Sunday.

Still, if Taylor shadows Holmes, that leaves Gay to cover Braylon "Trouble" Edwards (oh-oh), who's a jagoff but has played like the beast he was always supposed to be -- but never was until about a quarter of the way through this most recent season.

Edwards's newfound seriousness for the business of professional football seems to have dovetailed from two factors: A DWI arrest in September, for which he faces a court date on March 7; and pending free agency, which may or may not mean a long-term contract with a big signing bonus.

Perhaps he can land a new deal with the same team that signs notorious asshat T.J. Houshmandzadeh?

Whatever. Brayin' Braylon Edwards has played this season like a man with something to prove. So has Holmes, and we all know what Santonio can bring to the game on Sunday.

The question is, where will that help come from? Ryan Clark? Maybe, sometimes.

In addition to Holmes and Edwards, however, the Steelers will have to cover the Jets' very good tight end Dustin Keller, as well as the very capable slot receiver, Jericho Cotchery.

Troy Polamulu is listed as "probable" but will certainly play. Will he be less than 100 percent? Yes. Will Keller be his primary responsibility? Perhaps, sometimes.

One thing we know for sure: Defensive coordinator Dick LeBeau, NFL Hall of Famer, will mix coverages and, in doing so, will have some surprises up his sleeve, even if depth in the secondary could be problematic.

With both McFadden and backup safety Will Allen both listed as "questionable," there are, well, questions about how much playing time those two will play, and in what roles. Both will almost certainly play.

Still, there are questions.

How to cover the Jets' Jericho Cotchery, for one.

Maybe that's why, during his news conference on Tuesday, Mike Tomlin said:

"Jericho Cotchery, I have spent a lot of time over the past 24-to-48 hours or so looking at him and what he brings to them (the Jets). He played a pivotal role in securing the victory last week in the divisional round for them. He is a top-quality football player and very in depth at working in the slot."
So there you have it. Coach Tomlin is on the case and, well, we believe in him. We believe in Dick LeBeau, as well. And Troy Polamalu, Ike Taylor, Ryan Clark, William Gay, et al.

William Gay has been in difficult situations before. If you don't believe that, watch the video at this link -- the video starts automatically. If he can handle that sort of situation, he can handle Braylon Effin' Edwards.

Plus, Sunday will be Myron Cope's birthday.

"The worst ain't so bad when it finally happens.
Not half as bad as you figure it'll be before it's happened."
-- Gold prospector Bob Curtin, played by Tim Holt, in "The Treasure of the Sierra Madre"
Posted by Joey Porter’s Pit Bulls at Friday, January 21, 2011