Life is for Livin' 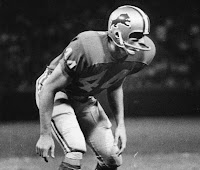 “Life is for livin’,” Dick LeBeau said yesterday in his Pro Football Hall of Fame induction speech. “Don’t let somebody tell you you’re too old. Stay in life. Life is a gift. Life is a joy.”

Man, if you don’t like Dick LeBeau, you don’t like life. LeBeau is about as cool a cat as any of dem cats, Miles, Thelonius, Sylvester, Felix, Gatto del Sol, any of dem cats.
And not just because he’s had a distinguished career as a storied NFL coach and record-setting defensive back (corner and safety, but mostly corner).
By all accounts, and we do mean all, everybody loves him. Everybody. His players, colleagues, peers, fellow coaches, reporters, analysts, fans, observers, casual acquaintances, everybody. And everybody says the same thing: Dick LeBeau is a consummate gentleman, a Class Act, all the way.

“If they had a Hall of Fame for human beings,
Dick LeBeau would be in that one, too.”


In addition to being all that, LeBeau just also happens to be a brilliant guy, a trailblazing coach, a scratch golfer, a great athlete, one whose eye-popping accomplishments as a player alone could have, should have, gotten him into the Hall of Fame years ago.
Think about it. By any standard, his 62 interceptions spanning a 14-year career would get your attention. By comparison -- and not to diminish anything Deion Sanders did -- but for comparison's sake, during his 14-year career, Deion Sanders had 52 interceptions.
You might say, well, QBs avoided throwing to Sanders' side of the field. True, maybe, but consider this: LeBeau's 62 interceptions were made long before the NFL had a pass-happy 16-game schedule, or even a 14-game schedule. And it's not like LeBeau was a weak link out there -- he made the picks -- again, 10 more than Sanders during the same-length career, but with a shorter annual schedule.
Okay, just for the hell of it, consider this, too ... Maybe QBs did throw to LeBeau's side more often because of who was on the other side, but just appreciate for a moment the sheer awesomeness of this cornerback tandem: LeBeau played corner for the Detroit Lions opposite Dick “Night Train” Lane, and how bad a bad-ass tandem was that? Yeah, pretty bad. As in: Great.
LeBeau didn’t say much about his playing career during yesterday’s speech, but he made his point, briefly and succinctly, toward the very end. That's when we saw a glimpse of his self-effacing, self-deprecating, wry humor – tinged with just a bit of, “Yeah, aw shucks, I guess I did okay in my day” type of tinge to his soft-spoken, almost-Southern lilt -- if only we could all talk like that.
Toward the end, when, during a long, almost rambling paen giving credit and judos to his players, he said of current Steelers cornerback IkeTaylor, “Maybe you don’t know this, but Ike has been not only a very good corner for us, but very durable. Over the past six seasons, he hasn’t missed a start. And not only has he not missed a start, he hasn’t missed a down we've asked him to line up, not a single play, so that’s testament to his durability.”
I’m scratching my chin, thinking, “Damn, I didn’t realize that. I guess Ike has been been pretty damn durable at that, and pretty damn reliable, never mind his hands.”
Thinking all that, when LeBeau adds the zinger, “I can’t help teasing Ike, I tell him, ‘Keep that up for another eight years, and you’ll catch me.'”
That’s when your jaw drops. Fourteen years without missing a start.
Damn. There it all is. The wry humor. The point made, yet not in a boastful or prideful way. Just. Point. Made.
It was like, “I wouldn’t be here if it wasn’t for my players, but I was pretty good player myself. And these players today, as good as they are, they couldn’t touch me as a player. Maybe that’s why they listen.“
And, “listen” they do. They had to, yesterday – they were all there. When was the last time – maybe this was the only time -- an entire NFL team left training camp to honor one of their own coaches by attending the Hall of Fame induction ceremonies? Yet there they were -- all of them.
That's because head coach Mike Tomlin took the entire Steelers squad to Canton. THAT alone is testament to the great respect and affection Dick LeBeau has inspired as a coach, as a player, and as a, well, as a gentleman.
As Coach LeBeau said, “Life is for livin’.”
Let’s not forget.
*** *** ***
Noteworthy Footnote and a Few Links Well Worth Reading:
JPPBs’ editorial comment: This is a great column that says so many things – just read the whole damn thing – it’s worth it. Here’s the last line:
“If they had a Hall of Fame for human beings, Dick LeBeau would be in that one, too.”