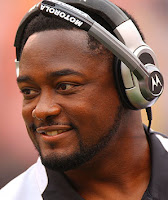 Is it any surprise the Steelers extended Mike Tomlin's contract? No.

Non-story. They even allowed it to become known to the public! See, Pirates President Frank Coonelly, that's how you do it. You're allowed to let people know about contract extensions given to your most visible and public-facing people like John Russell, manager of the Pirates, and Neal Huntington, general manager.

No word on exactly when the Steelers and Tomlin came to terms on the three-year extension, but surely it wasn't eight months previously, as was the case with the Pirates.

Whether you like Tomlin and have confidence in him as head coach of the Steelers -- and we do -- there is much to be said for stability and continuity. The Steelers have enjoyed enviable success with just three head coaches in 41 years. Other franchises, clearly, have not.

Joey Porter's Pit Bulls have been watching the NFL Network's broadcast of last season's "Hard Knocks," which originally aired on HBO. Interesting viewing. "Hard Knocks" provides a behind-the-scenes look at an NFL team's training camp. Last season, it was the Cincinnati Bengals, who were coming off a 4-12 season after which the rehiring of head coach Marvin Lewis and his entire coaching staff was very much in question.

We all know what happened next: The Bengals turned things around. They won the division. They beat the Steelers twice; they beat the Ravens twice; they beat the Browns twice. They forged an identity as a physical team with a hard-running offense and a tough, talented defense. They infused young talent at key spots on the defensive line and at linebacker. Both young cornerbacks, Jonathan Joseph and Leon Hall, emerged as shut-down corners and showed they could start right now for the Steelers, and we'd be happy to have them. Those two comprise one of the best young corner tandems in the NFL (you'd have to include the Jets in that conversation, and the Dolphins, too -- but not the Steelers, unfortunately).

How this relates to the Steelers extending Mike Tomln's contract is this: The Bengals, who have long had all kinds of turmoil and changeover in their organization, finally showed commitment to some semblance of stability by sticking with Marvin Lewis, although there must have been much sentiment among the fan base -- and some discussion in the front office -- to start anew. Again.

Their faith in Lewis was rewarded, and in watching "Hard Knocks," you can see why. Lewis knows what he's doing. What makes this series fascinating is the view into the Bengals operations: the organizational decision-making processes; the candid look at negotiations with the agent for holdout first-round pick Andre Smith; the fringe players battling for roster spots; how roster decisions and player cuts are handled; how Lewis sets the tone; and, perhaps most interestingly, how the assistant coaches conduct their positional group meetings and interact with their guys -- several of whom have had notorious run-ins with the law. If anything, the Bengals' assistant coaches are the unsung heroes of that turnaround season. Very impressive.

The point is simply that there's a lot to be said for continuity. It's best for all involved with the Steelers that there be no lingering questions about Tomlin's contract status entering the season. It would be stupid to make him hang out there, twisting in the wind, like the Pirates did with Russell and Huntington. But, that's the Pirates. These are the Steelers.

It's going to be a challenging, difficult and rocky season in any case. The Bengals and Ravens have every reason to feel confident they've leap-frogged the Steelers. Weaknesses that plagued last year's Steelers' team remain unresolved until proven otherwise -- and those include the secondary, the offensive line and the special teams.

The Roethlisberger situation certainly doesn't help. That's the biggest thing, obviously. Thanks, Ben. Scum.
Plus, Santonio Holmes is gone, Willie Colon is done, and the Steelers have a new offensive line coach, as well as a new special teams coach. Hines Ward isn't getting any younger, nor are the core starters on the defensive line. The last thing this team needs is any more uncertainty, and that includes the head coach.