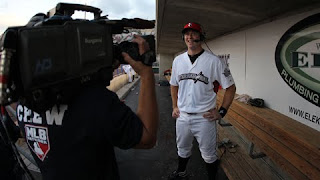 Tonight begins the second half of the season for the Pittsburgh Pirates. Whoopee!

In many ways, it is a fresh start, a clean break, from the disastrous first half. Running up to this week's All-Star break, the Pirates posted a record of 30-58, second-worst in major league baseball.

Let's put that behind us. The break provided a welcome respite and a chance anew to look forward: "Let's see what the kids can do! The pieces are coming together!"

In many ways, the mathematically inaccurate "second half" of the 2010 season represents an extended audition for many players. It's tempting to call it an "extended spring training" -- but it's July 16, for crying out loud; and, really, wasn't the first half of the season an extended spring training, miserable as it was? After all, the team apparently had to work out many kinks (base running, hitting, fielding, pitching), and also had to resolve numerous many roster issues, including the entire starting infield, two outfield positions and the starting rotation. Those are the kinds of things you work on in spring training.

Well, here we are.

Questions remain: Have the Racing Peirogies learned their lesson about voicing opinions on Facebook? Will team president Frank Coonelly ever speak without forked tongue? Will the Buccos outpace the Baltimore Orioles for MLB's worst record to "earn" the overall first draft pick in next year's amateur player draft? Will the Pirates lose more than 100 (105? 110?) games? Will they post the worst record since the 1953 Pirates (the infamous "Rickey Dinks")? Will general manager Neal Huntington make still more negative-return, futile, fruitless trades?

Will anybody pay much attention?

On its home page, the Post-Gazette now prominently displays an online countdown to Steelers training camp ("There are only 14 days until players report," the Post-Gazette Web site intones on its "News" home page, positioned just below "Breaking News"). Just in case you lost count and wanted to reschedule your summer vacation trip to Stone Harbor or Ocean City.

For the Pirates, that sort of diverted attention may be unfortunate but not unexpected. In Pittsburgh, some people would consider the start of training camp the end of the baseball season.

This year, training camp begins on July 31, which also happens to be baseball's non-waiver trade deadline. For most baseball fans, there's usually a lot of interest in potential deadline deals.

This year, however, even if the Pirates make a deal on July 31 (and Frank Coonelly says not to expect much, for what that's worth), it will be overshadowed by the buzz over the start of Steelers' training camp, and all that goes with it ... the local stations' breathless top-of-the-news coverage following every move, nuance and quote: From the arrival of players in outrageously expensive, tricked-out vehicles; through the annual unloading of mega-sized flat-screen televisions; to the message on James Harrison's tee-shirt; and, this year, the howling doggerel "analyzing" the effect of scumbaggio Ben Roethlisberger's suspension.

The Pirates? Well, at least Joey Porter's Pit Bulls will be paying attention, even as our attention drifts inevitably toward football.

That's because this year's edition of the Pirates is amazing. Utterly fascinating -- mostly for the wrong reasons, bizarre reasons, even -- but fascinating none the less.

The road record, for one thing. Tonight, the Pirates open a long homestand. And that's a good thing, because their record at home (19-20) stands in stark contrast to their record on the road (11-38). Eleven wins. Thirty-eight losses.

Truly. Amazing. It prompts us to ask once again, as we have done so often this season with respect to the Pirates: "How does a major league team even do that?"

We want the Pirates to succeed. We really do. The players seem to be trying hard. You'd like to feel optimistic, and spring is always a time for hope and optimism. It's mid-July, but who are we to quibble?

The Pirates have many storylines. The team stories are one thing -- if only in a sort of mordantly fascinating kind of way -- but quite a few of the individual players offer compelling reasons to watch, as well.

One of those is newly arrived catcher Erik Kratz (pictured above, speaking to the MLB Network about his call-up), the well-traveled 30-year-old rookie who seems eminently easy to root for.

Read why, in the more-than-excellent write-up over at The Green Weenie.