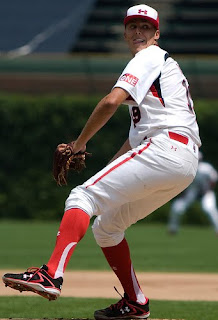 Give the Pirates credit for taking a HUGE risk in selecting high school pitcher Jameson Taillion their first-round pick and the second overall in yesterday's Major League Baseball draft.

The well-documented historical odds are against Taillon achieving great success in the majors, as a mere handful of prep school pitchers taken so high in the MLB draft have ever made it. The failures are more numerous, and more spectacular, than the few success stories

Still, the Pirates management team gulped hard and took Taillon over high school shortstop Manny Machado, whom many have compared to a young Alex Rodriguez. Machado almost certainly would have been the safer choice, and probably will arrive in the majors sooner than Taillon.

Taillon likely will take four or five years to reach the majors, and the Bucs' management team that selected him, including general manager Neal Huntington (in the last year of his contract, by the way), may not even be with the Pirates then.

Huntington called the choice "gut-wrenching." That indicates a lot of doubt, angst and anxiety. As a fan, that doesn't give me a lot of confidence.

The Pirates must have figured Taillon's tremendous talent, work ethic, pitch repertoire, quality character, imposing size and potential upside made him worth the massive risk. As a flamethrower from suburban Houston, the 17-year-old Taillon has already been likened to fellow Texans Nolan Ryan, Keyle Drabek and Josh Beckett, as noted by Jennifer Langosch on the Pirates' Web site ...

"Beckette is the pitcher Taillon calls his favorite; the Pirates are hoping similarities emerge between the two. It was Beckett whom the Marlins took with the No. 2 pick in the 1999 Draft, marking the last time a high school pitcher had been taken that high.

"And it is Beckett who has proven to be one of the few high school pitchers taken near the top to actually enjoy sustained success at the big league level. Sure, there have been recent exceptions, with Beckett, now with the Red Sox, and Royals ace Zack Greinke (No. 6, 2002) among the best examples. But for every player that has successfully made such a climb, dozens haven't panned out.

"It was because of such risk that the Pirates spent excessive hours identifying what traits Taillon shares with those pitchers who have succeeded. Scouting director Greg Smith, general manager Neal Huntington and the rest of the scouting department felt comfortable with what it found."

First, they'll have to sign Taillon to a contract.

If the Bucs sign Taillon -- and that's not a given -- they will probably have to pay a franchise-record contract in excess of the $6 million they paid to Pedro Alvarez two years ago. It doesn't help that this year's first pick, phenom Bryce Harper -- the next Mickey Mantle -- will command (and receive) from the Washington Nationals an all-time record contract in excess of the $15 million the Nationals paid to last year's pitching phenom Steven Strasburg, who by the way -- in a neat bit of karmic symmetry -- makes his major league debut this evening against the Pirates in Washington, D.C.

Just guessing here, but I wouldn't be surprised if the Hendricks/Taillon team's bottom-line demand is at least $8 million -- and they'll probably start in the $12 million range with the expectation of landing at about $8 million or so. For all we know, they won't settle for less than half what Harper is likely to receive.

That's another reason the Pirates must have gulped hard before selecting Taillon -- these are going to be tough, tough negotiations.

If they don't sign him, they end up with egg on their face, more accusations of operating a nickel-dime operation on the cheap, of being unable to compete financially with other big-league organizations, of failing to grasp the big picture, and of putting finances ahead of competitive success on the field.

Much is at stake here: It's a HUGE risk, and no slam dunk that they will sign Taillon.

If he doesn't sign, he will go to Rice University, which is in his hometown of Houston, is a baseball powerhouse, and an academically excellent university. That last point is important to Taillon and his family.

As Jen Langosch wrote, "The youngest of four children, Taillon has a sister in law school, a brother beginning his medical school residency and another brother who is a Ph.D. candidate. Taillon, himself, has dreamed of attending Rice University since he was nine, and began realizing that dream when he committed to the academically strong university as a sophomore."

So, going to Rice has supposedly long been a dream of Taillon's, so, presumably it is an option -- and, again, Rice has a solid tradition of being a perennial college baseball powerhouse.

And he simply would re-enter the MLB draft next year.

The Pirates have rolled the dice. It's a huge crapshoot, and it will be a long, long time before this particular roll of the dice stops tumbling -- and either pays out or craps out.

Everybody will be watching.