Welcome to The Show 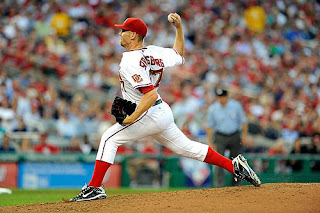 Anybody who's watched the movie "Bull Durham" knows that Major League Baseball is, in some circles, called "The Show."

Welcome to The Show, Mr. Strasburg.

Hell, Steven Strasburg is the show.

He certainly was last night, as he put on quite a show vs. the Pirates on national television. In the most heralded major league pitching debut in generations, Strasburg lived up to the hype, and that may be an understatement. He played the Harlem Globetrotters to the Pirates' Washington Generals. In seven seemingly effortless innings, Strasburg struck out 14 Pirates, including the final seven he faced.

As columnist Gene Collier summarized in this morning's Pittsburgh Post-Gazette ...


"Strasburg dazzled an SRO crowd with 100-mph heat and the assured speed-changing guile of a 10-year major league veteran.

"He struck out every Pirate in the lineup.

"He struck out seven in a row as the Nationals closed the curtain after 94 pitches, costing him a chance to tie the big league record of 20, even as his manager later admitted he could have thrown 194."

Today, the Pirates welcome a couple of their own prospects to The Show: pitcher Brad Lincoln and outfielder Jose Tabata.

Lincoln is supposed to start this evening's game vs. the Nationals. Tabata apparently will play left field on at least a semi-regular basis, with Lastings Milledge moving to right and Garrett Jones to first base.

Jones will take over first in place of Jeff Clement, who joins Charlie Morton in exile in Indianapolis. It's possible neither Clement nor Morton will ever make it back to The Show.
Posted by Joey Porter’s Pit Bulls at Wednesday, June 09, 2010