It Was 40 Years Ago Today: Dock Ellis In The Sky With Diamonds 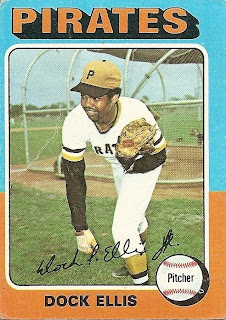 "One time I covered first base, and I caught the ball and I tagged the base, all in one motion and I said, "Oh, I just made a touchdown."
-- Dock Ellis 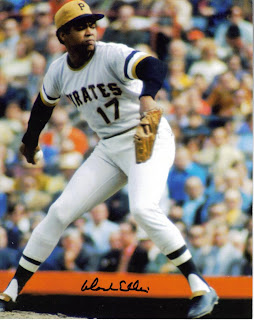 You Tube Video / No Mas Presents:

Dock Ellis and the LSD No-No

Dock Ellis in His Own Words

The 40-year anniversary of Dock Ellis' no-hitter, famously pitched while he was on LSD, falls on Saturday, June 12. In honor of one of the most astonishing feats in baseball history, and the release of Big Hair and Plastic Grass: A Funky Ride Through Baseball and America in the Swinging '70s by Dan Epstein, we bring you an excerpt from the book on Ellis:

Bowie Kuhn may have been appalled by Ball Four's tales of groupies and greenies, but the commissioner would have suffered a total cardiac if he'd realized what Dock Ellis was up to.

With the counterculture still on the rise in the wake of Woodstock, it was only a matter of time before it inﬁltrated the world between the foul lines -- and as befit a man whose name could be written out on a scorecard as "Ellis, D," the 25-year- old Pittsburgh Pirates pitcher loved nothing better than to spend his off-days tripping on acid in his psychedelically decorated basement while cranking Jimi Hendrix, Black Sabbath, and Iron Butterﬂy. But on the afternoon of June 12, 1970, just as his latest tab of Purple Haze was beginning to kick in, Ellis realized that he was actually supposed to be pitching in a few hours, in a ballpark 120 miles away.

The strange saga of Dock Ellis' LSD no-hitter actually began two days earlier, on Wednesday, June 10. The Pirates had just ﬁnished a series with the Giants in San Francisco and ﬂown down to San Diego, where their four-game series against the Padres was scheduled to commence that Friday. A native of Los Angeles, Ellis decided to take advantage of his day off by dropping acid, renting a car and driving up to L.A. (apparently in that order) to see some pals. They spent Wednesday night smoking weed and drinking screwdrivers until the sun came up, whereupon Ellis ﬁnally crashed. Upon awakening, Ellis dropped another tab of acid; after all, he reasoned, he wasn't slated to pitch again until Friday. Unfortunately, as one of his friends soon informed him, it was Friday -- Ellis had completely slept through Thursday.

Somehow, Ellis' friend -- who also happened to be tripping -- managed to get the pitcher to LAX, where he caught a shuttle ﬂight to San Diego. Arriving at the park about 90 minutes before ﬁrst pitch, he popped several Benzedrine "white crosses" to try to even things out, and went to warm up in the bullpen.

Speaking to poet Donald Hall for his book, Dock Ellis in the Country of Baseball, Ellis recalled that the ball felt like a "very heavy volleyball," and that he ﬁgured he'd be lucky to last an inning.

Things got even weirder once he took the mound. The ball's size and weight kept changing, and at times Ellis couldn't make out his catcher, Jerry May, through the psychedelic fog -- but as long as Ellis could still see the reﬂective tape on May's ﬁngers, he knew more or less where May's mitt would be.

For much of the game, Ellis had no idea what the score was, how many outs had been recorded, or how many runners were on base. He was wild, walking eight batters and hitting one, and the Padres -- who noticed that Ellis seemed oddly uninterested in holding runners at ﬁrst -- stole three bases off him.

All Ellis cared about was throwing the ball "down the multi-colored path" to May. Baseball superstition dictates that whenever a pitcher is in the process of throwing a no-hitter, his teammates must refrain from speaking to him in the dugout, lest they jinx his effort. Ellis, completely unaware that he was racking up consecutive hitless innings, mistook his teammates' respectful distance for silent disapproval of his acid-fried state.

To combat his encroaching paranoia, he concentrated on painstakingly removing the mud from his cleats with a tongue depressor, and avoided any eye contact with the Pirates' players or coaches. Some sources claim that Pirates rookie Dave Cash committed a major faux pas by blithely informing Ellis halfway through the game that he was working on a no-hitter; others have said Ellis turned to Cash in the seventh and tempted fate with a shout of, "Hey look, I've got a no-no going!"

What's certain is that Ellis' concentration grew more laserlike as the game went on; after Willie Stargell put him up 2-0 in the seventh with his second solo shot off Padres pitcher Dave Roberts, Ellis allowed only one more baserunner over the three ﬁnal innings. With two outs in the ninth, Ellis caught Padres pinch hitter Ed Spiezio looking on a 3-2 pitch, and baseball's only LSD-assisted no-hitter was in the bag, man.

Excerpted from "Big Hair and Plastic Grass" by Dan Epstein. Copyright © 2010 by the author and reprinted by permission of Thomas Dunne Books, an imprint of St. Martin's Press, LLC.

Maybe somone should try slipping current Pirate management some acid. It certainly couldn't hurt!!
It just might stir up some of their creative juices.

Or better yet,maybe they will wake up a few days later and say "I sold what???"

It may be that they take LSD every day.

Makes as much sense as any other explanation for how they've constructed this cast of characters.

How many utility players can one team have??!!!