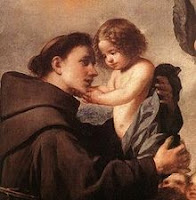 On this, the feast of St. Anthony of Padua, the Decline of Western Civilization continues ... well, okay, maybe not the decline of western civilization, but the long, dark decline of the Pittsburgh Pirates certainly continues.

With their loss in Detroit last night, the last-place Bucs have lost seven in a row and are a full 16 games under .500. It's only June 13, for crying out loud.

This Pirates' roster is a joke, and the lineup insults baseball fans everywhere.

Never mind the point that Pedro Alvarez should be with the club already. What's the thinking behind Ryan Doumit getting work at first base? It seems pointless, unless they're showcasing his versatility and "position flexibility" for a possible trade? Steve Pearce will return soon, so what's the point of playing Doumit at first base? Doumit has looked uncomfortable and out of place there.

"Ryan Doumit sat in his stall in the visiting clubhouse at Comerica Park and stared at the floor. True, first base isn't his usual position. but the Pirates' regular catcher wasn't going to use that as an excuse for his error that led to two runs in the seventh inning, giving the Detroit Tigers a one-run lead. And even though the winning run came on a Carlos Guillen homer in the 10th inning off Brendan Donnelly for a 4-3 victory, that didn't matter to Doumit.

"When you first start playing baseball, the first thing your dad and your coach tell you is, 'Keep your eye on the ball,' " Doumit said after the loss, the Pirates' seventh in a row to match a season low. "I just didn't keep my eye on the ball. Does this one (stink)? Yeah. Am I going to lose sleep over this? Yeah."

And so it goes.

This is no great surprise, but it's official -- Neal Huntington says Andy LaRoche will be a utility infielder when Pedro Alvarez is promoted next week (presumably).

How many futility infielders can one team have? The Pirates now have LaRoche, Bobby Crosby, Aki Iwamura and Delwynn Young. Perhaps they brought Neil Walker up with the expectation that he would be a utility player, but he's put a stranglehold on the second base job, thank heavens.

Bob Smizik writes that this is the worst Pirates team in 50 years, which probably is giving it too much credit (especially considering that 50 years ago, the Pirates fielded a world championship team that beat the Yankees -- which makes this year's club look all the worse by comparison).

In any case, the mid-1980s teams have to be in the discussion, but you might have go back much further: The 1953 team was worse, and one for the ages. This year's edition might be the worst since then.

Smizik makes some good points, including the following about the lineup in Friday night's game in Detroit:

"By the time Detroit closer Jose Valverde had struck out two in a 1-2-3 ninth, Ryan Church, the DH and No. 5 hitter, was batting .190. No. 7 hitter Aki Iwamura was at .178 and No. 9 hitter Jason Jaramillo .190. Add to that mix No. 6 hitter Lastings Milledge, who does not have a home run in 192 at bats this season, and it’s easy to see why the Pirates offense is the worst in MLB with 198 runs in 61 games."
The Pirates truly are a laughingstock. Oh, and by the way, the Pirates are a major league-worst 71-112 in interleague play. Jeff Karstens vs. Armando "Almost Perfect" Gallaraga today. What could possibly go wrong?