Too Bad for Limas Sweed 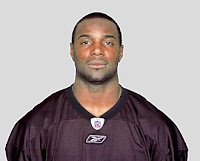 Joey Porter's Pit Bulls have the feeling that Steelers' wide receiver Limas Sweed must feel accursed. During his first two years with the team, after being drafted in the second round (52nd overall), Sweed underperformed.

Sweed became known more for dropped passes than for the few passes he caught during his first two seasons with the team. The drops included spectacular, high-profile potential touchdowns in crucial situations, including the AFC championship game against Baltimore and during a 23-20 loss to Cincinnati last season. Then the team placed him on injured reserve with a "non-football illness," widely reported to be a battle with depression.

Probably nobody was more disappointed in Limas Sweed than Sweed himself.

And, like most Steelers' fans and observers (including, almost certainly, the coaching staff and team management), Joey Porter's Pit Bulls also felt disappointment in Limas Sweed.

Now we feel disappointment for him, after he ruptured his Achilles tendon yesterday, the final day of mini-camp.

He was no lock to make the team. It was going to be an uphill climb for him in any case, especially after the Steelers signed two veteran wideouts (Arnaz Battle and Antwaan Randle-el) in the off-season and drafted two more receivers (Emmanuel Sanders and Antonio Brown) in last month's draft.

Just this past Saturday, however, the day before he ruptured his Achilles tendon, the Post-Gazette's Ed Bouchett wrote that Sweed had "switched uniform numbers and hopes for a new lease on his life and the sport he loves to play."

This past weekend's mini-camp presented the opportunity for Sweed to showcase his newfound determination to put the past behind him and start over. Bouchette wrote that Sweed said on Friday, "I feel good, felt like I'm in college again. I feel fresh, feel young, real confident. I'm ready to play some football."

Now, instead of looking to jump-start his football career, Sweed may have to consider a new career altogether. Achilles heel injuries can be devastating and potentially career-ending, especially for a running-centric position like wide receiver.

JPPBs feel bad for the guy. Yes, he was a disappointment his first two years. It doesn't make him a bad person. It's not like he was chasing some drunken, 20-year-old coed into a closed-door bathroom stall barricaded by off-duty cops in his "entourage." It's not like he was accused of sexual assault or of hitting a woman, or anything criminal, disgraceful or shameful. He didn't even do anything moronic like kicking a towel dispenser in a Sheetz convenience store or urinating in the street outside Finnegan's Wake.

He dropped a few passes and became depressed (reportedly, despite HIPAA). That's about it. Now, he's injured -- and his fledgling career in football may be done before it ever got off the ground, depending on the severity of his injury and his recovery from it. He may never get another chance on the football field.