The Price Just Went Up 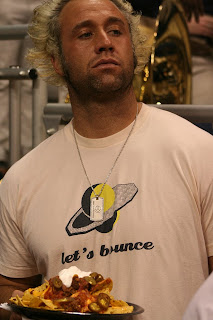 No, not those spirits -- though, on second thought, yeah, probably, given his history and temperament -- but back to the point: The Steelers' placekicker, on the eve of free agency (which begins March 5), must be feeling pretty good about his prospects for landing a huge new contract.

Whether he signs with the Steelers, however, is more doubtful than ever.

Statistically, Janikowski is not as reliable as Reed, but he might be able to hang with Reed drink for drink, so he's got that.

Nevertheless, Davis awarded "Seabass" with a monster contract (for a kicker) worth $16 million over four years, with $9 million guaranteed. That figure happens to match the numbers Davis paid last year to punter Shane Lechler. So now, the Raiders have the NFL's highest-paid kicking tandem, and arguably the best.

Al Davis's insanity aside, Janikowski won his windfall by virtue of his ability to kick field goals. As reported by the San Francisco Chronicle:


"Janikowski hasn't made the Pro Bowl in 10 seasons with Oakland, but he had a strong argument for inclusion last year. His 90 percent accuracy rate was second best in the NFL, with just one miss under 57 yards. No one matched his 15-for-18 mark from 40 yards and beyond. And, his team-record 61-yard field goal in snowy Cleveland was the third-longest in NFL history."

Reed, however, and his agent, Don Henderson, certainly can argue he is every bit as deserving of a contract just as weighty as Janikowski's. And that's just what they'll do: Argue their case. Ed Bouchette does it for them in today's edition of the Pittsburgh Post-Gazette ...

Janikowski does have a leg up (ahem) on Reed in long field goals. Reed's longest kick last season was 46 yards. Janikowski nailed one from 61 yards, in the snow, in Cleveland.

Plus, and this is not to be discounted, Janikowski's kickoffs routinely go deeper than Reed's, whose short, low kickoffs no doubt contributed to the Steelers' woes in kickoff coverage last year. Janikowski ranked in the top two in kickoff touchbacks in the 2007 and 2008 seasons. He slid to ninth in that category last season, but that might be attributable to Oakland's desultory offense.

On a related note, Joey Porter's Pit Bulls have never understood why kickers are routinely dismissed by traditional writers, pundits and so-called experts. Looking for evidence regarding the value of kickers? Look no further than Dallas, San Diego, New York and Cincinnati. Their kickers all missed crucial field goals in the 2009 playoffs. As did the Colts' Matt Stover in the Super Bowl, for cryin' out loud.

Say what you will about Jeff Reed, he's been rock-steady in the post-season. Given their history, however, the Steelers are unlikely to be swayed by another team's signings.

As noted on this blog here and previously, we have feeling that Jeff Reed is unlikely to return to the Steelers. Now, with Janikowski's whopping new contract, Reed's return seems more unlikely than it did the day before yesterday.

Consider, for one thing, the rumblings out of Cincinnati that the Bengals are set to part ways with Shayne Graham.

Jeff Reed, a Cincinnati Bengal? A Jet? A Cowboy? None of it sounds right. Then again, stranger things have happened.

If Reed hasn't called Janikowski yet to offer effusive thanks, he should do so. Today. And, while he's at it, he may as well pick up the phone and thank Al Davis, as well.

Addendum:
Here is more evidence on the difference a kicker can make -- for better or worse; well, worse, anyway -- in the following excerpt from this article in Pro Football Weekly...

"In the wild-card round, Bengals PK Shayne Graham, the fourth-most accurate kicker in NFL history, missed field goals of 35 and 28 yards in the second half of Cincinnati's 24-14 loss to the Jets. The 35-yarder, which sailed left, could have cut the Jets' lead to 14-10 in the third quarter, and the 28-yarder bled to the right with Cincinnati trying to cut New York's lead to just a touchdown with less than four minutes left in the game.

"Graham had missed only five kicks in the regular season, two of which were blocked. But Graham's struggles, untimely and out-of-the-blue as they were, paled in comparison to Chargers PK Nate Kaeding's failures on all three field-goal attempts in San Diego's 17-14 loss to the Jets in the divisional-playoff round. Granted, one of Kaeding's misses was from 57 yards at the end of the first half; hard for anyone to get too upset over that miss. However, Kaeding's other misses — a 36-yarder that traveled left of the mark in the first quarter, and a 40-yard attempt that traveled far right of the mark with the Chargers trying to claw back to within seven points in the fourth quarter — were hard to figure, especially when Kaeding had missed only three of 35 field-goal attempts in the regular season.

"Then, in the AFC championship game, Jets PK Jay Feely, who made 30-of-36 FG attempts in the regular season and was 2-for-2 in New York's first two postseason wins, missed a pair of kicks in a 30-17 loss to Indianapolis. Feely missed a 44-yard FG attempt just to the right, and he was well wide right on a 52-yarder in the third quarter. After the latter miss, the Colts drove down and scored a touchdown to take the lead, which they never relinquished."