Picking Up Where We Left Off ... 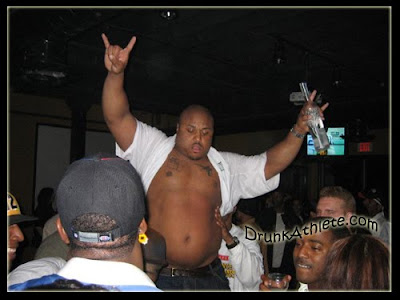 Yeah, yeah, we know: The Steelers went on a five-game losing streak and so did Joey Porter's Pit Bulls. We got disgusted and quit posting for a while. So what? Maybe the losses to the Chiefs, Raiders and BROWNS (??!!!) did it. Anyway, here are we are. Once again. Happy New Year.

Joey Porter's Pit Bulls just finished reading Ed Bouchette's article (in Sunday's Pittsburgh Post-Gazette) on nose tackle Casey Hampton's status. Frankly, Joey Porter's Pit Bulls believe Hampton, also known as "Big Snack," didn't have that great a season in 2009, and that he made the Pro Bowl primarily on reputation. Also, we remain concerned about Hampton's longevity -- how many years does he have left? He might be one of those guys (like James Farrior) who gets old in a hurry, or he could hang in there for another five or six years. It's hard to say, especially for nose tackles.

Having said that, and considering the looming expiration of the league's Collective Bargaining Agreement (CBA) and a potentially uncapped year, the Steelers' best option might be to apply a one-year "non-exclusive franchise tag" on Hampton. As Bouchette explains, it would work like this (with emphasis added by yours truly) ...

"Hampton has said he wants to stay with the Steelers and privately has told people that someone promised him the team would not put the franchise tag on him.

"The cost to put the one-year franchise or transition tenders on a player have not yet been revealed by the league or the players union. Last season a one-year salary required to pay a franchised defensive tackle was slightly more than $6 million, about $5.5 million for the transition tag.

"Each team will have both a franchise and transition tag if the collective bargaining agreement is not extended by March 5. That might not be a bad way for the Steelers to go with Hampton, who counted $6,652,000 against their salary cap last season. He would roughly count the same if franchised in 2010.

"If they put the "exclusive" franchise tag on Hampton, he cannot negotiate with other teams. The "non-exclusive" tag would allow him to negotiate and if he signs and the Steelers do not match, they would receive two first-round draft choices in return. The transition tag only allows the Steelers the right to match another contract and keep the player.

Plus, the team has so many other holes to fill (offensive line, cornerback, etc.), this option seems like a no-brainer, even if Hampton may not like it (and, really, for him, what's not to like about getting paid more than $6 million for one year of playing football for a team with a chance to compete for the Super Bowl, in the city that's been his home for the past nine years and with arguably the best fans in professional football).

As for the other potential free agents that Bouchette plans to cover this week, Joey Porter's Pit Bulls expect all of them will be set free to explore free agency. Those players are Ryan Clark, Willie Parker, Deshea Townsend, Willie Colon and, yes, Jeff Reed.

We suspect that all things being equal, the team would like to keep Willie Colon, but we also suspect that his agent may encourage him to go for the big payday, considering his relatively young age, the premium on offensive tackles in the NFL, and the fact that this window represents perhaps his one big opportunity to grab the gold ring -- so Colon may be out of the Steelers' control in any case.

As for Jeff Reed, eh, tough call. It's been fun -- destroying towel dispensers at a Sheetz convenience store!; spiky goofy hair!!; ridiculous pictures on the Internet!!! drunken arrest for assuming a "fighting stance" with cops outside McFadden's Pub!!!! -- and reliable kickers are invaluable. Just ask the Arizona Cardinals and Cincinnati Bengals, whose kickers (Neil Rackers and Shayne Graham, respectively) missed crucial and potentially game-winning field goals in the playoffs. Reed, of course, missed two crucial field goals during the regular-season loss to Chicago, missed another potential difference-maker against Cinci, and of course has been featured in various police reports while carving out a hard-earned Internet reputation as a lovable, partying goofball during the past few years. His kickoffs are nothing special, either, and likely contributed to the many long kickoff returns last year.

The Steelers may have tired of Reed's act and almost certainly are weighing their options, especially in light of the off-field issues, erratic kickoffs and Reed's potential salary with its concurrent hit on the salary cap, at least in 2010.

Well, just sayin' ... don't be surprised if we're all saying hello to Piotr Czech as the Steelers' new placekicker next September.
Posted by Joey Porter’s Pit Bulls at Sunday, January 24, 2010