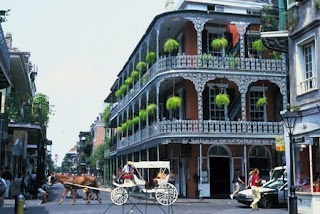 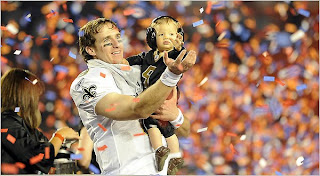 Well, that was an easy team to root for. Good for them, the people of New Orleans, and Saints fans everywhere. Congratulations on a feel-good, well-deserved triumph.

After a fast start by the Colts, and a shaky one by the Saints, the game turned out to be pretty good. Damn good, in fact, at least if you wanted the Saints to win.

The halftime show was awful. Embarrassing. The Who -- great in their heyday, which was a long time ago -- not only sounded awful, they looked old and decrepit (Pete Townshend must've appeared downright scary in hi-def). Plus, one couldn't help but wonder if the Half-Who (Daltry, 65 years of age, and Townshend, 64) went to the event thinking it was a match between Leeds and Arsenal. From now on, American acts for American football, puh-leaze: Somebody more au courant, somebody more vibrant, somebody more relevant. Springsteen's show last year was great -- but wouldn't you think it was time for a Super Bowl act under the age of 60?

The Who once sang, "Hope I die before I get old." Too late.

Back to the game:

If it was a match of Payton vs. Peyton, Saints head coach Sean Payton bested Colts quarterback Peyton Manning. Peyton's dad, former Saints quarterback Archie Manning, must be very bitter this morning; but he's always bitter, so who cares.

This game was pretty much a microcosm of Manning's career. Seven straight seasons now, of 12 wins or more. Yet a mere 9-9 record in the playoffs. And just one Super Bowl win. Still.

For all the gaudy stats, records and regular-season wins, Peyton Manning came up short in the post-season once more. He's in danger of that being his legacy. Seems like, as a control freak, everything needs to go just perfect for him, or he gets discombobulated, frayed, frazzled., unraveled. A little pressure, a bit of a pass rush, slightly sloppy conditions -- and gag! Interception. Can we have no more of that "greatest quarterback of all time" talk, for a while, please. For a while? Thank you.

Drew Brees, on the other hand, was storybook-remarkable. Precise and accurate, cool and composed. A cool breeze. He was the better quarterback this day. After the first quarter, Brees completed 29 of 32 passing attempts (one dropped by a receiver) for 261 yards. That's pretty good. Brees is a winner.

Considering how well Brees's career has played out over the past 10 years, Joey Porte r's Pit Bulls wonder what that cretin Michael Vick was thinking last night. No, who cares. What were the fans of the Atlanta Falcons thinking? Remember, it was the Falcons who were so eager in 2001 to draft Vick with the first overall pick (owned by the San Diego Chargers) that they traded two significant draft picks to San Diego. The Chargers then used those picks to draft LaDanian Tomlinson (first round, fifth overall, and arguably the best running back in the NFL for most of 2000-09) and ... you guessed it, Drew Brees (second round, believe it or not, 32nd overall). For the record, the Steelers that year drafted nose tackle Casey Hampton in the first round (19th overall), and the Saints drafted running back Deuce McCallister (23rd overall).

Karma's a bitch. Or a Saint.

Anyway, after a long, inglorious and downright ignominious history, the New Orleans Saints are Ain'ts no more. It's All Saints Day.

Saints alive, and bless us one and all.

Dallas Morning News: The Who? Why?

Rick Ellis: Review: The Who Live at the The Super Bowl Halftime Show

The New York Times: The Who, and the Super Bowl's Evolving Halftime Show

A team of destiny? ... This column, by Vincent Bonsignore of the Los Angeles Daily News, was certainly prescient when it was published Saturday and, in retrospect, was spot-on.

The selection of Super Bowl halftime acts, according to The New York Times, is determined by the N.F.L. and specifically by ...

"Charles Coplin, the league’s vice president for programming. The league used to outsource the production of the halftime show. That stopped after Janet Jackson’s infamous ”wardrobe malfunction” in 2004. The Who, Coplin said, was chosen because its music is familiar to many viewers (think the intro to the CSI television series) and plays well in big stadiums. He said the recent spate of older bands was no guarantee another one would be chosen for next year’s Super Bowl, which will be in Arlington, Tex."
God help us. I'll bet Charles Coplin, whoever he is, is a real fun guy and his iPod is a real hep place.

Here's an excerpt from Rick Ellis's review (linked to above):

"Roger Daltry and Pete Townsend (ie. The Who) were the half-time performers at this year's Super Bowl and the entire segment was dreadful and often horrifying to watch. Even though the vocals were apparently pre-recorded, the singing was often off-key. The harmonies were non-existent and both Daltry and Townsend lumbered across the stage with all the grace of a couple of retirees searching for their walkers."
Posted by Joey Porter’s Pit Bulls at Monday, February 08, 2010