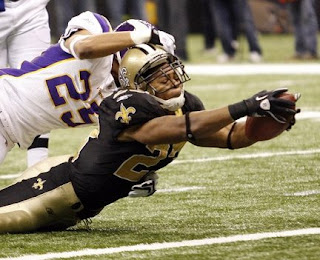 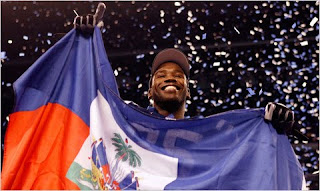 Congratulations to the New Orleans Saints and the Indianapolis Colts. Especially the Saints, who are Aints no more.

Just about everybody's going to be rooting for the Saints, and why not? Great city, long-suffering fans, storybook turnaround in the four-plus years since Katrina, uptempo offense, generally classy players led by quarterback Drew Brees and safety Darren Sharper, and a first-rate head coach.

The Colts, too, have a great quarterback (Peyton Manning) and a likable, classy head coach (Jim Caldwell). There's much to like about both teams, really, Archie Manning notwithstanding. The senior Manning, a bit of a tool, represents one common link between the two teams, and he will be a media storyline the next two weeks. Archie Manning was a legendary quarterback for the Saints way back when they carved out a near-unrivaled reputation for ineptitude and woefulness. He was so good -- on famously bad teams -- that he was the first Saints player to be named to the franchise's hall of fame. He went on, of course, to father two current-day NFL quarterbacks: the New York Giants' Eli Manning, who won a Super Bowl two years ago; and -- do we even need to say it? -- Peyton Manning, the future NFL Hall of Famer who won a Super Bowl three years ago and is back with Indianapolis for another crack at the Lombardi Trophy.

Archie Manning isn't the only common link between these two teams. This is the first Super Bowl where each team has a player named Pierre, and both play prominent roles at skill positions on offense for their respective teams.

For the Saints, it's Pierre Thomas, their terrific all-around go-to running back. Thomas was instrumental in yesterday's thrilling win over the formidable Minnesota Vikings. He scored two clutch touchdowns, had a key 40-yard kickoff return late in regulation and churned out tough yardage all day, including the crucial fourth-and-one conversion that kept alive the winning drive in overtime. "Mazel-tov!", as the late, great Steelers' broadcaster Myron Cope would say.

For the Colts, it's Pierre Garçon, who may have the most compelling story of anybody on these two teams -- which really is saying something.

Garçon, a speedy, playmaking second-year wide receiver, is the son of parents who immigrated from Haiti to the United States years ago.

Garçon grew up in Miami before attending Mt. Union College, a tiny but accomplished Division III powerhouse. To say he was a longshot even to make a team in the NFL is an understatement. Yet on Sunday, there he was, a starting wide receiver in the AFC Championship game and a primary target for the legendary Peyton Manning.

Garçon caught a game-high 11 passes for 151 yards and a touchdown, setting an AFC title game record for receptions and posting the third highest yardage total in the long, storied history of the Indianapolis/Baltimore Colts franchise.

All of this, of course, played against the backdrop of the unfolding tragedy in Haiti, a catastrophe of Biblical proportions. Not surprisingly, Garçon and his family have relatives in Haiti, and Garçon had to watch the situation since the earthquake even as he prepared for the title game. He vowed to play for the people of Haiti, and he promised to have a big game, a statement game, and he did.

"For Garçon, the opportunity to bring attention to Haiti was as important as a trip to Super Bowl XLIV: "What is going on over there is very tough," Garçon said. "Nobody should go through that, especially people that are less fortunate already. It is just bringing awareness and (giving) people support, and everyone has been showing their hands and helping us out."
-- Source/quote credit: Tom Silverstein, report in the Milwaukee Journal-Sentinel
As pointed out by Toni Monkovic at the New York Times's blog, The Fifth Down, columnist Hal Habib at the Palm Beach Post summed up Garçon's situation nicely:

Although born in New York, he's a Haitian-American, with relatives on the island still unaccounted for. When you're in a situation like that, he says, you don't wake up and immediately turn on CNN. You sleep with it on.

"It's been a tough week," he said after the game, his smile disappearing for the first time. "It's been sad, just going through it, playing through them, playing so people could have more awareness about what's going on down there where I'm from. This hopefully puts a smile on their face for the day."

Electricity, of course, is at a premium in Haiti, but Garcon, 23, did his best to send the message there by draping the flag around the Lamar Hunt Trophy awarded to the AFC winner, then bringing it to his post-game news conference, as he did after the Colts' first playoff game. In a way, he had to bring the flag, because, he figures, he brought the people of Haiti with him on the field.

"It's what's motivating me now and keeping me strong," he said.

Garçon is an easy guy to root for, hanging preposition notwithstanding. The New Orleans Saints are an easy team to root for.

Should be a good Super Bowl.