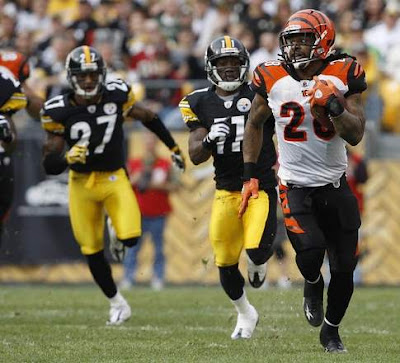 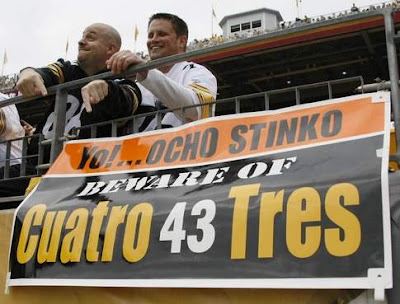 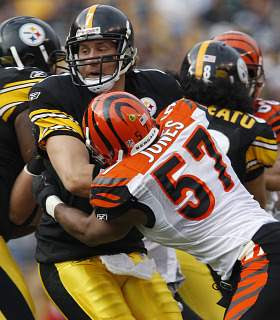 The Bengals out-Steelered the Steelers yesterday at Heinz Field, as galling as it is to admit that. Give credit where credit is due. The Bengals played stout defense, performed on special teams and did just enough on offense -- especially late in the fourth quarter, again -- to win the game.

While it is tempting after defeat to assign blame, it's also prudent to assess the opponent and figure out what they did to beat your team. After all, the Steelers and Bengals are likely to meet again in the playoffs. They can't beat us three times in one year, can they? Nahhh ...

As a team, the Steelers seemed out of sync, and just a little bit off, all day, particularly on offense.

On defense, Defensive Coordinator Dick Lebeau did his job, as far as we can tell. For the second straight game, the Steelers held a heralded foe without an offensive touchdown. Also on the plus side, cornerback Ike Taylor once again held Chad Ochocinco in check, limiting him to just two catches and allowing keeping Ochocinco out of the end zone.

Additionally, it was neither LeBeau's fault nor Troy Polamulu's fault that Troy went down with a left knee injury (same knee as before). Injuries happen. Just ask Cincinnati running back Cedric Benson. Still, Troy's absence made a huge difference -- it had to, especially late in the fourth quarter (just like the first game against the Bengals, when the game was on the line).

No excuses. The Bengals beat the Steelers. The question for future reference (i.e., playoffs) is, how did they do it?
First and foremost: Defense.
The Steelers ran 17 plays (17!) in the Red Zone and came away with no touchdowns. It didn't help -- not at all-- that James Harrison (Silverback) drew a crucial, 15-yard unsportsmanlike conduct penalty to keep the Bengals' final drive alive. That penalty cost time as much as it did yardage. Nevertheless, the Steelers' defense allowed only 61 yards rushing, 178 yards passing, and zero touchdowns. That's a pretty good day's work against a talented squad.

As for the Steelers' offense, uncharasterically, Santonio Holmes and Heath Miller let key passes sail through their hands. Although both would have been tough catches, those are catches we've come to expect those guys to make. Holmes's was especially disappointing since he was wide open in the end zone and Big Ben threw a fairly nice pass, albeit a little high and fast, and it came in directly over 'Tones's head. Tough catch. But still.

With that in mind, the play-calling merits scrutiny. Why? Why did the first-half pass-to-run ratio amount to 27 passes and just 9 runs? Why?

Moving on ... let's look at Special Teams. Shield your eyes, though, because here's where it gets prickly. Again, keep in mind that neither team scored an offensive touchdown.
For the third time this season, however, the Steelers allowed a kickoff return for a touchdown.

"Special Teams Coach Bob Ligashesky, you got some 'splainin' to do."

In the last four games, the Steelers have surrendered three (three!!!) kickoff returns for touchdowns. Inexcusable. Short of going out on the field, though, we're not sure it's entirely Ligashesky's fault.

Which brings us to kicker Jeff Reed. Maybe it's not all his fault, either, but: For crying out loud, at least try to make a tackle, Drunko.
That's the second time this season Reed merely waved at and/or ran by a kick-returner going for a touchdown. I hope the pleasantries he exchanged with returner Bernard Scott were congenial, as Scott was flying past him, because Reed's effort was laughable.
Additionally, and perhaps even more worrisome, is that Reed's kickoffs all season have been short and low. The result is that even when the other team doesn't get a long return, they're still starting too many drives at the 35-yard or 40-yard line. And, then, this morning, we heard Reed on the radio saying, "I did my job. My job was to force the return man to the inside lane, and I did that."

Bullshit, and that statement smacks of pointing fingers at your teammates. How is that the other team's kickers consistently launch their kicks five yards deep into the end zone, yet Reed rarely gets his kickoffs beyond the five-yard line?
This is an issue, Skippy, and it ain't funny. Three kickoff returns for touchdowns, two missed field goals during the three-point loss in Chicago, and a missed field goal in the first loss to Cincinnati, which won that first game by, yup, three points. Not cool. Not cool at all.

Watch out, Reed, or next season you may be kicking for the Cleveland Browns ... who play the Baltimore Ravens in this evening's Monday Night Football matchup. We're betting the folks at ESPN are thrilled to be airing this one. Whoop-de-doo!

On a more positive note, congratulations to the Pitt Panthers for defeating the Notre Dame Fighting Irish in Saturday night's thriller. Good job. Pitt wide receiver Jonathan Baldwin looks like a young hybrid of NFL stars Calvin Johnson and Larry Fitzgerald, and that ain't a bad thing to be, no sirree.

Now, all Pitt has to do is beat the West Virginia Mountaineers and the highly ranked Cincinnati Bearcats, and the Panthers will be invited to a major bowl. Piece-a-cake.
Posted by Joey Porter’s Pit Bulls at Monday, November 16, 2009

Coach Bob Ligashesky, TAKE REED WITH YOU BACK TO ST. LOUIS

I have mixed feelings about Jeff Reed. He's been generally reliable, especially on field goals (including in two Super Bowl victories and in the playoffs, too).

HOWEVER, it seems like he has impending free agency on his mind. Could it be that he's afraid of getting hurt attempting a tackle? ... and doesn't want to hinder his chances of signing a big fat contract with a new team? IN any case, Reed's effort on that kick return yesterday was pitiful, and was the object of open mockery this morning on the NFL Network (Rich Eisen, Deion Sanders, Steve Mariucci).

Also, from what I understand, Ligashesky hails originally from McKees Rocks. The Rocks. For what that's worth.