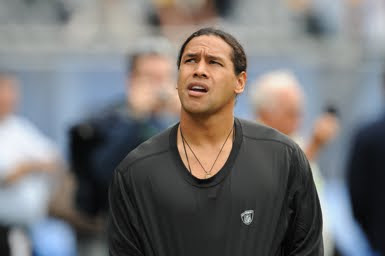 Reasons for Optimism? Troy, for one.

Troy Polamalu missed the first game against Cincinnati. There's no way the Bengals march down the field on that decisive 16-play, 71-yard drive in the final minutes. Sixteen plays! Not with Troy on the field.

Also on defense, Lawrence Timmons returns to the lineup. Keyaron Fox has played great in his absence, however, so that's not as big a deal as Troy being back in the lineup. Perhaps more importantly, count on Dick LeBeau having some new tricks up his sleeve.

Plus, we're at home.
On the offensive side of the ball, the Steelers' offensive line is playing at a very high level, with Max Starks nullifying two of the NFL's best defensive ends (Jared Allen and Elvis Dumerville) the past two games.

Granted, Cincinnati's defense has been playing great -- having stuffed Baltimore's offense last Sunday. The Steelers have so many more weapons at receiver than Baltimore, however -- so that should help counter the one-on-one matchups the Bengals hope to play with their cornerbacks, Jonathan Joseph and Leon Hall.

It's worth noting Rashard Mendenhall didn't play in the game at Cincinnati. Willie Parker started at running back, and Joey Porter's Pit Bulls are convinced Parker wasn't healthy. It's no secret he had a hamstring problem during training camp, and possibly something else (turf toe?).

Also on the replacement front: Mike Wallace has emerged as the No. 3 receiver in place of Limas Sweed, who dropped a touchdown pass in Cincinnati. Wallace makes that catch. 'Nuff said about that.

Granted, the Steelers are going to have to play their best: The Bengals have a much more balanced attack than the Broncos. Nevertheless, for the aforementioned reasons -- Troy, Lebeau, Mendenhall, Starks & Co., home field -- Joey Porter's Pit Bulls are cautiously optimistic the Steelers will win on Sunday and take over first place in the AFC North.

We wouldn't give the seven points, though.

Footnotes & Addenda
"The fact that the NFL levied a fine isn't surprising. This is a league that devotes pages in its rulebook to regulate how much players can celebrate after scoring a touchdown, so that it showed no sense of humor was to be expected. ...

"As for paying off the fine, Ochocinco should totally send a box full of 20,000 ones to the NFL offices. If he needs help getting that large an amount of bills, I'm sure he can get Pacman Jones' phone number pretty easily."
Posted by Joey Porter’s Pit Bulls at Friday, November 13, 2009