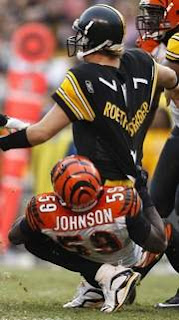 Since Sunday, Joey Porter's Pit Bulls have had a niggling feeling that we've seen this somewhere before.

By "this," we mean the pass-rush schemes employed by the Cincinnati Bengals. Defensive coordinator Mike Zimmer reportedly insisted that his outside rushers (defensive ends and linebackers) stop rounding off their rushes and stop running past the pocket (and Ben Roethlisberger) -- and instead cut short their pursuit lanes at a certain point, as if on a 90-degree angle.

The idea was to contain Roethlisberger from doing what he does so well, which is to improvise, scramble, buy time and throw on the run while rolling out to one side or the other. Just ask the Broncos about the open lane left open by an onrushing defensive end who simply got pushed past the pocket -- Roethlisberger deftly stepped forward, through the open space, and launched a howitzer shot to Mike Wallace at the goal-line for a touchdown in front of late-arriving Broncos' safety Brian Dawkins.

Well, on Sunday, the Bengals maintained their lanes, contained Roethlisberger and harried him all afternoon -- knockdowns, batted passes, sacks, you name it.

Anyway, it occurred to us we've seen this tactic before. Remember Kordell Stewart? His career went downhill, rapidly, once defensive coordinators figured out the way to contain him -- which is precisely what the Bengals did on Sunday.

Granted, Big Ben is much, much better than Kordell -- there's no comparison (zero!), except perhaps for the mobility factor, to a point -- but it will be interesting to see whether other teams employ tactics similar to what the Bengals used on Sunday.

It is, after all, a copycat league.
Posted by Joey Porter’s Pit Bulls at Tuesday, November 17, 2009