Miles to Go Before We Sleep 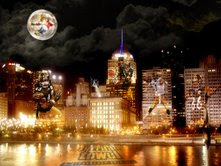 We have miles to go
before we sleep."
-- Mike Tomlin, Steelers' head coach -- quoting poet Robert Frost --to his players Sunday night following his team's win over Baltimore.
Yup. True dat, and there's plenty to keep Coach Tomlin and Steeler Nation awake at night. Bloviating blowhard Skip Bayless, on ESPN 2, called the Arizona Cardinals the worst team ever to make the Super Bowl. Wrong! At this point, the Cardinals may be the best team the Steelers have played this season -- and the Black 'n Gold had the NFL's most brutal schedule.

Nope, it doesn't get any easier. And it all starts with quarterback Kurt Warner. Warner, who is nine months older than Coach Tomlin, won a Super Bowl nine years ago with the St. Louis Rams and two years later appeared in another, which he and the Rams lost to the New England Cheatriots. While both he and Ben Roethliesberger are pursiuing their second Super Bowl triumph, respectively, Warner has a decided edge in experience, a markedly quicker release and wa-a-a-y better receivers, especially if Hines Ward's sprained right knee limits his effectiveness to any great degree.

Speaking of the Cardinals' receivers, three (Larry Fitzgerald, Anquin Boldin and Steve Breaston) tallied 1,000 yards each this past season. Each is dangerous in different ways.

Larry Fitzgerald is simply the best in the game; and that's no surprise, based on what we saw him accomplish at Pitt, except he's gotten exponentially better. Do ya think, if he'd been in the unfortunate Limas Sweed's position Sunday night, that he would have dropped that pass? Nope, didn't think so (Sweed's first error on that play was "misunderestimating" the flight of the ball and, thus, slowing down on the route [Larry Fitz routinely adjusts to the ball in the air] secondly, Sweed took his eyes of the ball [Fitz has laser-like concentration, screens defensive backs and adjusts accordingly]; third, and worst of all, Sweed dropped the ball [Fitzgerald has the best hands in the game, by far]). Fitzgerald runs any and all routes to perfection, catches everything thrown in his direction and is plenty fast enough, strong enough and elusive enough to tack on major yardage after the catch. The only "rap" against him coming out of college was that he didn't have the greatest straight-line breakaway sprinter's speed -- but ask the Eagles, Panthers and Falcons if he's too slow. Fitzgerald is kinda like a young John Stallworth.

On the other side is longtime Pro Bowl receiver Anquin Boldin, one of the most accomplished and productive receivers in the game, mostly because he's ferociously tenacious, pugnacious and competitive. Boldin battles every play, and defensive backs around the NFL routinely describe going up against him as, well, exhausting. He's kinda like a healthy Hines Ward.

Steve Breaston, the second-year wideout from the University of Michigan and, previously, Pittsburgh's Woodland Hills High School (state champion under Breaston's leadership at quarterback), has the flat-out, deep-route, straightaway speed that Fitzgerald and Boldin may lack, not that they need it. Having amassed more than 1,000 yards this season, he's already matured into a bonafide NFL receiver, and he is a lethal kickoff and punt returner. Breaston is kinda like a more accomplished, more polished Devin Hester, with better hands.

Joey Porter's Pit Bulls have heard some people suggest the Steelers will assign cornerback Ike Taylor to shadow Fitzgerald, but we don't see that happening. If anything, Bryant McFadden might match up better against Fitzgerald but, again, we don't anticipate seeing much one-on-one coverage. Expect the Steelers' defense to mix coverages and try to clog the middle of the field to take away crossing routes and mitigate Warner's short drops and quick release. Linebacker Lawrence Timmons may well play a major role in this capacity.

We also anticipate that Arizona head coach Ken Whisenhunt will open the game by trying to establish the run. We know from his time as the Steelers' offensive coordinator that Coach Wiz routinely gave certain looks to set up subsequent plays: He would show a fake reverse, for example, early in a game before springing a real reverse later. Against the Eagles, he used the run, early on, to set up the spectacular flea-flicker that produced Fitzgerald's blockbuster touchdown. We foresee him trying to establish the run to set up the pass.

Speaking of the running game, the Cardinals have the venerable Edgerrin James (nearing the end of what is arguably a Hall of Fame career but sill looking good) and productive rookie Tim Hightower, who runs as tough inside as he runs fast outside, with equal productivity. These guys are trouble, as are their tight ends.

On defense, Arizona has given up a lot of yards, but their defensive-line guys penetrate up front, their linebackers roam sideline-to-sideline to stuff the run, and safety Adrian Wilson is certainly in the conversation as one of the three best safeties in the NFL. This group is tougher than most people give it credit for. If Hines Ward is markedly less than 100 percent and serves primarily as a decoy, expect the Cardinals to double-team Santonio Holmes, bring Adrian Wilson up to clog the running game (and cover tight end Heath Miller) and dare the Steelers to beat them with Nate Washington and, gulp, Limas Sweed.

Coaching? We know all about head coach Ken Whisenhunt, offensive coordinator Russ Grimm and special teams coach Kevin Spencer, all of whom coached on Bill Cowher's staff that won the Super Bowl just three years ago. One might think they know something about the Steelers but, as Coach Tomlin said this week, the Baltimore Ravens' coaching staff probably knows at least as much about the Black 'n Gold.

One advantage for Pittsburgh: 20 Steeler players have Super Bowl experience, vs. only five for the Cardinals. By gametime, the Cards may be so over-amped that they will be prone to mistakes. Not saying it will happen, but it might.

In any case, the Cardinals are not to be taken lightly. Big Ben had better be at his improvisitional best, and the Steelers had better run the ball effectively to maintain time of possession and thus keep Arizona's offense off the field. This will be the key to the game.

With miles to go before we sleep, there's plenty to keep us awake at night.

Editor's note: Sorry for the long hiatus. Issues with Blogger and other things. JPPB will try to post more regularly.
Posted by Joey Porter’s Pit Bulls at Tuesday, January 20, 2009

Hey. You have a great blog here. I have been blogging for about a year now and have made over $2000 online. I have this blog http://www.howtofallasleepeasily.com/ and I would love for your site to be a part of its success.

If you are curious, you can simply check out my other blog called http://www.videobloggingtips.com/. It gets a load of traffic. However, I expect my how to fall asleep easily site to get a lot more. Predicing around 1,000 hits a day in the next 3 or so months.

With that being said, I would like to do a link exchange with you. I link to you and you link to me. We both greatly benefit because my traffic will become your traffic and vis versa. Thus we make more money.

I know what I am doing and if you really want to know how people make money online, this is how. They build relationships with other bloggers.

Email me at ttomp13@gmail.com and let me know if you'd like to exchange links.

Thanks and keep up the great work.
-Taylor

Hmmm....there's a comment of crass commercialism above. Anyway, Mike Tomlin is a classy act. I like how he moved Tuesday's press conference to 1pm...and then quoting Robert Frost!! Tomlin in 2016!!! Glad to see you back on the boards, JPPBs!!!

While I love Tomlin,I think moving the press conference to 1:00 had nothing to do with class. Just the realization that not a whole lot of people would be showing up at noon becuse there was actually something more important going on than Steeler football.

The Robert Frost quote was from his press conference last Sunday.

Glad to have you back JPPB, don't be such a stranger.

B&B: Thanks for the comment. There's enough time between now and 2016 to win One for the Other Thumb AND the four other fingers.

Anon.: It's hard to believe there might be something more important than Steeler football, but ... yup, you're right. I have a feeling Coach Tomlin (and others) wanted to watch the inauguration, too, like most of the rest of the nation.

Thanks, too, for the welcome back. Sometimes, when you slide off the grid, it's hard to get back. I'm back. Thanks again.