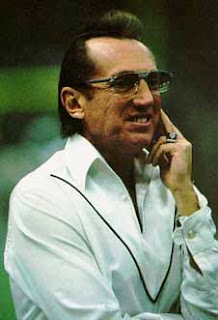 Could Oakland Raiders owner Al Davis get any weirder?

"Darth Raider" had a news conference last night to announce the firing of head coach Lane Kiffin, who, despite his girly name, seems like an okay guy and a standup citizen. Anyway, it was clear that Darth Raider (Al Davis) has issues -- he's psychotic -- and he's also cheap, really cheap. He is trying to fire poor Lane Kiffin "for cause" and get out of paying him the approximately (not even) $2 million left on his contract.

Listen, Al, you made a hire, it didn't work out the way you wanted it to, pay the man off. It's not that much money. Not to you.

By the way, if you want any insight into Al Davis, look up and read any number of classic, incredible articles in Rolling Stone by the late, great Hunter S. Thompson. He was one of the best writers, ever, and he inspired Joey Porter's Pit Bulls into a way of life and a stark style of writing for which we can only find hope and a way of peering far into the horizon, however darkly.

Anyway, back to Al Davis: Thank God for the Rooneys. It make you appreciate class. Irish class. Brawling boxers at heart, but generous, classy, rough-hewn and down to earth -- the kind of people who take care of other people.
Posted by Joey Porter’s Pit Bulls at Wednesday, October 01, 2008