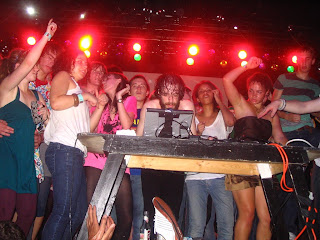 So, how is it that a 26-year-old Pittsburgher named Greg Gillis, a former biomedical engineer (?!) turned DJ-musician also known as Girl Talk, has become a national sensation without hardly any media coverage in his hometown?

Today, Greg Girl Talk was featured in a major article in The New York Times, including the following excerpt:

"Mr. Gillis declined to say how many copies of “Feed the Animals” had been downloaded or what fans had paid for them. But, he said, he makes enough money performing that he quit his day job as a biomedical engineer last year. One major expense for him is computers; his live show takes such a toll on them that he went through three reinforced Toughbook laptops last year."

The NYT article followed extensive coverage of his recent appearance at Lollapalooza in , which prompted the following coverage and interview at the always worthy Chicagoist.

"Radiohead Shmaediohead. If there’s one act we’re pumped to see at Lollapalooza this year, it’s the sweatfest dance party stylings of mash-up artist Gregg “Girl Talk” Gillis. Riding high on the recent release of Feed the Animals, Girl Talk takes the stage in Grant Park on Sunday for a live sample-based set certain to spark a raucous party and rip the festival a new one."

It's probably no surprise Girl Talk receives so little mainstream coverage in his hometown of . As Mark Twain said, "When I die, I want it to happen in . It'll take 20 years to catch up to me."

Funny thing,I've never heard of him, but today I was thumbing through Whirl magazine at work and I think he was voted one of Pittsburgh's 50 most eligible or something like that. You know those goofy "Let's pat ourselves on the back" type of things.
I know, I know, it was a slow day at work. Whirl was the only magazine around.
It was either that, or look at Brad and Angie's kids.

Well, you KNOW you've arrived when Whirl turns its hoary spotlight on you. Whirl. Whew-hoo.

Thanks for the correction. That's a good interview.