The Steelers scored on all five possessions with Dandy Landry Jones at quarterback. A relatively small sample size, but, really, What's Not to Like?

When he entered the game, expectations were low, but Joey Porter's Pit Bulls barked, "It's gotta be easier to watch Jones, even if he's gonna suck."

As it turned out he did just fine, with five scoring drives, two touchdown passes and a gaudy 149.3 quarterback rating. No turnovers; no sacks.

It's awkward and painful to watch the wretched quarterback play of Marcus Michael Vick, who should have been intercepted at least three times today -- just like last week vs. San Diego.

With Vick at quarterback vs. the Arizona Cardinals, the Steelers averaged 0.5 yards per offensive play. They were oh-for-six in third-down conversion attempts. Vick had six yards passing at halftime. Six!  The net yardage was even worse: With Vick at quarterback, the offense in the first half had a single pathetic net yard (one yard, net) passing on three completions in seven attempts. Total offense: a measly 59 total net yards,

Clearly, they were a much better offense today with the 26-year-old Matthew Landry Jones at quarterback, in his first NFL regular-season game. Who knew?

Coming Up
As for next week in Kansas City, Joey Porter's Pit Bulls agree: Jones should start. The way coaches think, however, we wouldn't be at all surprised to see Vick start ... the coaches' rationale being that it's a road game, a hostile environment, a noisy crowd, and Vick's a "veteran."

NFL coach-think typically is so conservative and risk-averse that it frequently defies common sense and what everyone else can see. No doubt, Mike Tomlin considers Vick the "safe" choice.  Despite all evidence to the contrary. Just ask Antonio Brown. Vick has proven to be the only player in the NFL capable of stopping Antonio Brown.

Other things to feel good about: 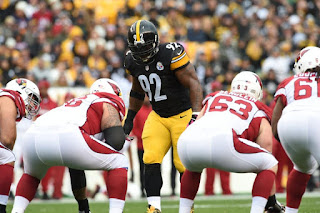