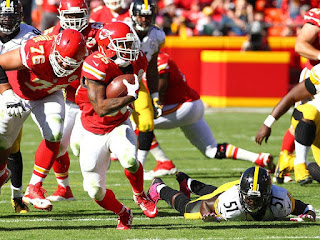 Sloppy tackling. That was the thing that stood out most glaringly in the Steelers' loss in Kansas City. 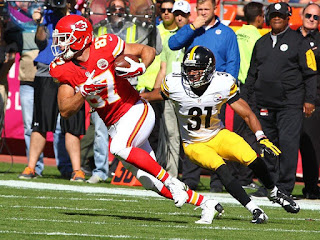 The defense forced no turnovers and didn't get off the field often enough on third down: The Chiefs converted 56 percent (9 of 16) of their third-down conversion attempts -- their best production of the year in that key category.

The linebackers were probably the guiltiest culprits when it came to sloppy tackling. The secondary was leaky, too, somehow allowing two heretofore obscure rookie receivers, Chris Conley (3rd rounder, out of Georgia) and Albert Wilson (undrafted free agent, Georgia State), to have breakout games with clutch, big catches for chunk plays in key situations. Together, the two caught nine passes for 134 yards. Inexcusable.

Add tight end Travis Kelce's 73 yards receiving on five receptions, and it's easy to see how Alex Smith cobbled together 250 yards passing even without his No. 1 receiver, Jeremy Maclin.

Perhaps most telling, the defense allowed some guy named, improbably, Charcandrick West to run through, over and around it for 110 yards and a touchdown. West's 110 yards just about cancelled out Le'Veon Bell's hard-earned 121 yards rushing.

On offense, unforced errors thwarted momentum at several key points. First of all, DeAngelo Williams's drop of an on-the-money pass right to his hands on the first drive that would have given the Steelers an early 7-3 lead instead of settling for a 3-3 tie.

After that, it seemed like an uphill slog through the rest of the game. Antonio Brown's rare drop/bumble also hurt. 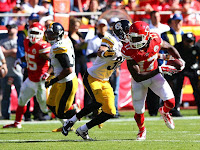 Play calling was questionable, on both sides of the ball.  The Chiefs' offensive line had been a sieve prior to today, but the Steelers generated just one sack. The absence of Stephon Tuitt makes us wonder all the more why Cam Thomas remains on this team.

The Steelers just didn't make the big play(s) they needed in any phase of the game: offense, defense or special teams. The Chiefs did enough to win on their home turf; the Steelers made too many mistakes to win a road game vs. a 1-5 team.

Next up: The Cincinnati Bengals, coming off a bye week, visiting Heinz Field.
Posted by Joey Porter’s Pit Bulls at Sunday, October 25, 2015