They Are Who We THOUGHT They Were!

To borrow the words of former Arizona Cardinals Denny Green, "They are who we THOUGHT they were!"

Which is, for most of them: Not very talented. Not very smart. Lousy tacklers. Hapless. Clueless. Undersized. Slow. And not very good at their craft,

It was no surprise, the way they performed; but it was shocking, the ineptitude. 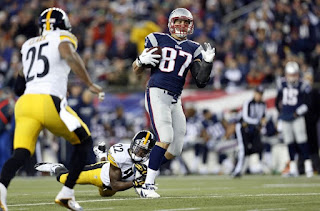 Yet the Steelers, time and again, allowed Rob Gronkowski to break free, unjammed, and roam free, unmolested and uncovered, romping an frolicking past the undersized, overmatched and all-too-slow safeties, corners and linebackers who flailed haplessly as they were either getting outjumped, stomped or run around by Gronkowski.

The missed tackles. The blown coverages. The half-hearted attempts at coverage. Honestly, it was embarrassing.

What happened to the plans to jam Gronkowski, play him tight and disrupt patters? Big talk. Turns out it's easier said than done.

If the performance we saw Thursday night is what we have to look forward to watching all season, it's going to be a long year.

Well, we're stuck with them.