In Saturday night's loss to Baltimore, penalties hurt the Steelers as much as anything.

The eight penalties for 114 yards negated Antonio Brown's nine catches for 117 yards. You take away Antonio Brown and Le'Veon Bell, and what do you have? A loss. 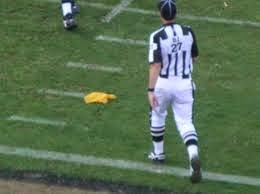 The penalties are an old-bug-a-boo that bit the Steelers badly early this season but had been mitigated for the most part over the second half of the season.

Following the loss to Tampa Bay, Mike Tomlin said, "We kicked our own butt today with penalties."

The same could be said about the playoff loss to the Ravens -- although penalties weren't the only reason the Steelers lost. Still, they were a big factor.


"The bottom line is we are an undisciplined group," Tomlin said at the time. "We're too highly penalized. ... It's unacceptable; it's inexcusable. Some of the pre-snap penalties and post-snap penalties are just lack of discipline. It's ridiculous. False starts, encroachment. That we have full control over."

Apparently not. All those types of penalties came back into play at the worst possible time on Saturday night, either derailing Steelers' drives or giving new life to the Ravens.

It's something that should be a point of emphasis in training camp and throughout next season.

Email ThisBlogThis!Share to TwitterShare to FacebookShare to Pinterest
Labels: penalties