The Lack of Mack 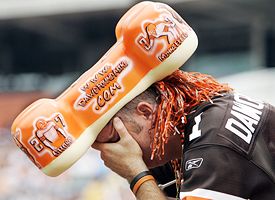 It's the Steelers' bye week but also time to pay close attention to the competition. Maybe no team this season has been more interesting than the Cleveland Browns.

After center Alex Mack went down with a knee injury on Oct. 12 when the Browns trampled the Steelers, 31-10, Joey Porter's Pit Bulls couldn't help but wonder how his absence would affect the Browns. Guys like Mack aren't replaced easily. When healthy, he is arguably the best center in the NFL.

How key is Mack to the Browns? If there was a player besides Brian Hoyer the Browns couldn't afford to lose, it was Mack. Since Mack's injury, Cleveland is 3-2, with the two losses being to Jacksonville and Houston.

More importantly, as noted by ESPN.com's Pat McManamon, here is how Cleveland's running game has fared since Mack went down:

Say no more. Even with Josh Gordon's return from suspension, the Browns are going to have a tough time, if they can't run the ball.