Lots of talk this week about the Steelers having trouble beating bad teams. The Tennessee Titans are a bad team. 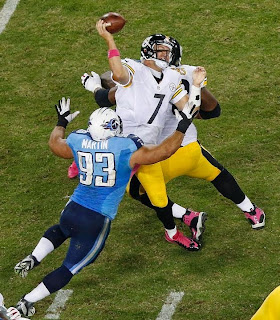 The Titans have been bad, or at least mediocre, for a good while now. Yet that hasn't stopped the Tennessee franchise from defeating the Steelers 13 of the last 19 times the two teams have met.

The two most recent losses to Tennessee were especially ugly for the Steelers.

In the 2013 season opener at Heinz Field, the Steelers inexplicably played flat and appeared not ready for the game ... after seven weeks of training camp ... at home ... against an inferior opponent.

By the late fourth quarter, with about five minutes left, CBS announcer Ian Eagle pronounced, "This has been a nightmare for the Steelers: injuries, poor execution, lack of execution, no running game."

The Steelers went on to lose another three straight games to open the season 0-4. They never recovered, and finished 8-8.

In 2012, in a Thursday night game at Nashville, the Steelers made mistake after mistake, letting a bad Titans team hang around and hang around until the very end, when Rob Bironas kicked a 40-yard field goal as time expired.  That was an ugly game, and it was one of several bad losses to inferior teams that year. The Steelers finished 8-8.

In that game: Drew Butler had a punt blocked; Shaun Suisham missed a 54-yard-field goal attempt; Roethlisberger killed a drive with a bad interception just before halftime; Keenan Lewis dropped a gimme interception; penalty flags flew; the defense got pushed around and couldn't generate a pass rush; and defensive end Derrick Morgan had his way with Mike Adams for most of the night. It was embarrassing.

Whatever whammy bad teams have on the Steelers, let's hope the Black 'n Gold figure out a way to get past this year's woeful Titans.

Lots of Connections between the Titans & Steelers