The Baltimore Ravens have four Smiths on the roster, for crying out loud.

Daryl Smith starts at inside linebacker, and he's still pretty good, even at 32. The other inside linebacker, by the way, is rookie C.J. Mosley, whom Baltimoreans proclaim is the NFL Defensive Rookie of the Year. It should be interesting to see how his counterpart on the Steelers, Ryan Shazier, responds to that gauntlet thrown his way.

Jimmy Smith will be a non-factor on Sunday because he won't play. He was hurt in Sunday's loss to the Bengals. 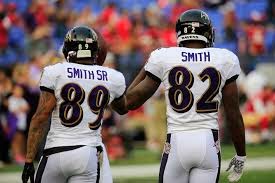 For all Steve Smith Senior's general douchebaggery, Steve Smith and Torrey Smith present a formidable combo at wide receiver for the Baltimore Ravens. And Steve Smith (Sr.) will be the first to tell you he's under-appreciated, disrespected and plays with a chip on his shoulder, blah, blah, blah. His act gets tiresome, but he can still play -- and he can still push off with the best of them.

Baltimore head coach John Harbaugh, in typical Harbaugh hyperbole, called Smith's 80-yard touchdown that was called back because of offensive pass interference on Smith, "One of the greatest plays I've ever seen."

The officials may or may not have got the call wrong. Depending on your perspective, it looks like Smith definitely pushed off, but it also looks like Bengals safety George Iloka flopped intentionally to draw a flag -- he went down way too easily -- and that call probably wouldn't have been made if the game had been in Baltimore instead of Cincinnati.

In any case, Smith is a notorious push-off artist, and the officials are definitely calling these sorts of penalties more aggressively this year. Smith probably doesn't make that catch if he hadn't pushed off. Boo-hooo.

By the way, the Indianapolis Colts' defense earlier this month limited Steve Smith Sr. to five receptions for 34 yards in a game just a few weeks ago -- yeah, those same Colts we saw the Steelers obliterate on Sunday. You never know.