There is no fix in personnel coming.  At this point, it will have to be up to the Steelers coaches and players to fix the mess that the secondary has become.

Loose coverage, sloppy tackling, missed assignments, poor angles, mental miscues -- the Steelers' corners and safeties have done all of the above with alarming regularity over the course of the first four games this season.

We first saw it in the season opener at home vs. Cleveland. Dick LeBeau has always coached his guys to tackle the catch. His guys missed way too many tackles and let Cleveland receivers run free on their routes and after the catch.

Alarmingly, too, on the touchdown by Travis Benjamin, a smallish second-year speedster, he just flat-out beat Ike Taylor on a simple out route in the end zone. Fast, quick, economical moves -- nothing fancy. Benjamin just beat Taylor, who lost coverage on Benjamin and let him get open in a small space.

But then we saw almost exactly the same play, same part of the field, same result, in the Tampa game, with different players. Vincent Jackson, a tall receiver, used virtually the same route on William Gay. Same result. Gay lost coverage on Jackson and let him get open in a small space. Troy was late to the play, so he was no help and is not to be absolved. 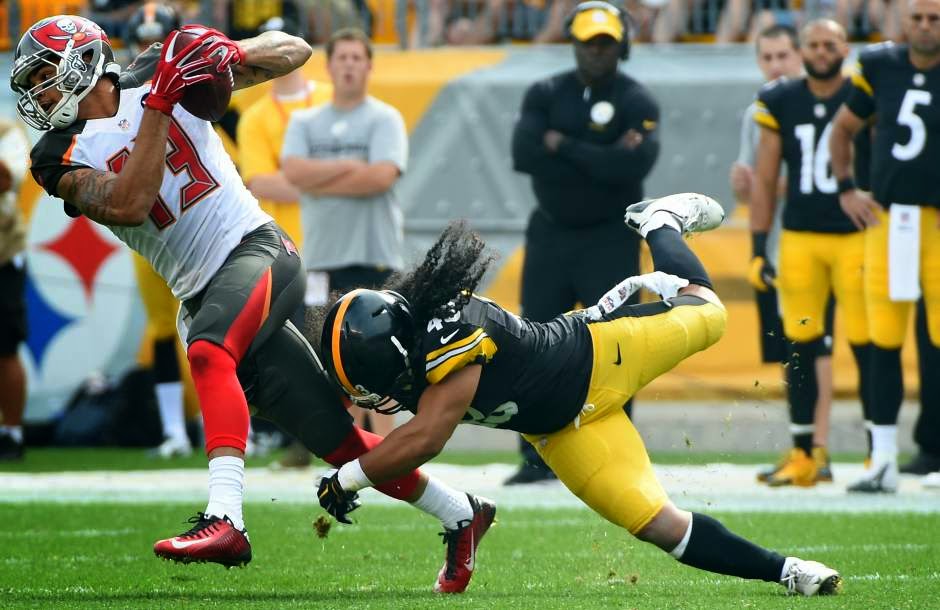 The capper of all plays this season, of course, was the 41-yard fourth-quarter pass to Louis Murphy in Sunday's loss to the Buccaneers.  Joey Porter's Pit Bulls have watched that play over and over, and it it textbook on how NOT to play secondary. Textbook.

Every single player in the secondary screwed up. Watch it closely. You'll see. The corners drifted, seemingly expecting help from safeties who weren't there. Cortez Allen seemed to have a brain cramp for a crucial second there, when Murphy broke inside. And the safeties came up and ... and...  seemed to lose focus ... well, who knows what Mike Mitchell was thinking. He looked lost.

And then, after Murphy caught the ball, he ran free. They didn't tackle him until he meandered way downfield, to the five-yard line to be exact.

The Steelers have to fix the secondary, and fast. Like this week.  If Mike Glennon and Louis Murphy can beat in you on a comeback drive in the fourth quarter at your stadium, you're in trouble.

The Steelers are in trouble.
Posted by Joey Porter’s Pit Bulls at Thursday, October 02, 2014

Email ThisBlogThis!Share to TwitterShare to FacebookShare to Pinterest
Labels: secondary