A Stinker of a First Half in Jacksonville 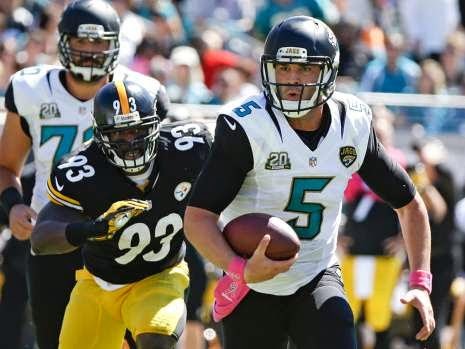 The first half was nearly unwatchable.

Holy cow, NFL football has gotten bad, what with the penalties, the commercial interruptions, the saccharine announcing on television, the stinko quality of football, the lousy officiating, and the lack of basic football fundamentals executed with any sort of regularity on the field.

The Steelers are going to have to get their act together in a hurry, if they are going to beat the Browns in Cleveland next week. At the moment, the Steelers lead Jacksonville by a halftime score of 10-6. Jacksonville's offense features seven rookies. Its defense has surrendered an average of 38 points per game this season, which is an historically wretched pace. How the Steelers are leading this team by only four points ...

First sign of trouble: The defense couldn't and didn't get off the field on Jacksonville's first drive, which consumed a whopping eight minutes.

More red zone woes on offense: Early in the second quarter, the Steelers had to settle for a three instead of seven when Roethlisberger got planted on third down. Nobody was open.

On the kickoff following the Steelers' field goal, another penalty: Second quarter, with 12:30 left, Antwon Blake jumps offside (!) on the Steelers' kickoff (??!!!).  And this was a penalty that was especially hurtful because Blake's penalty off-set a personal foul penalty by the Jags. On the re-kick, Shawn Suisham somehow lofted a short kick that was fair-caught (?) for excellent field position for Jacksonville. Next play, two penalties were called on Jax, accepted; next play, another penalty on the Jags, negating what would have been a first down on what should have been a great catch by rookie Allen Hurns.

Next play, on second-and-28, Bortles launched a long pass to Penn State rookie Allen Robinson who somehow allowed himself to be outmaneuvered by the much shorter Cortez Allen, who intercepted the ball. Bortles and the Jags' coaches probably figure the result is about the same as a punt. The Steelers take over on their 45. Three and out. Brad Wing's punt goes into the end zone.

Holy cow, this game is a stinker.

For as bad as Jacksonville's defense has been this season -- and we're talking NFL-historically bad, as in being on a pace to surrender the most points in NFL-history bad -- how is it that the Steelers' offense couldn't put up more than three points until two minutes were left in the first half?

The Jags' personnel on defense contains some solid veterans. Linebacker Paul Posluszny is very good. So are Red Bryant and linebacker Chris Clemons, who signed from Seattle as off-season free agents. Never mind that. The Steelers should be pounding this team.

The Steelers once again appear to be playing down to the level of the competition. This has been a recurring pattern for the past few years.  Okay, that's it for the first half. The Steelers' offense is two-for-six on third down.