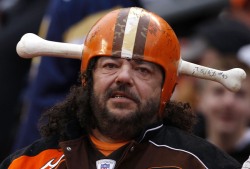 What do we really know about the 2014 Cleveland Browns? ... other than that, from top to bottom, they are probably the most dysfunctional organization in the NFL and that they had probably the most tumultuous off-season of any franchise. On the field, however, what can we expect to see on Sunday at Heinz Field?

What we do know is that the Browns have a rookie head coach, Mike Pettine, about whom questions are already being asked.  And it is fair to question the way he's handled the two-headed quarterback monster that is the combination of Brian Hoyer and Johnny Manziel.

As for the coordinators, Cleveland's offensive coordinator is the polarizing Kyle Shanahan.

The Browns have some good personnel on defense, but, in Jim O'Neil, they have a first-time NFL defensive coordinator. Nobody knows how he's going to handle the defense, which also happens to be Pettine's specialty, so we can expect to see his stamp on it to some extent.

Back on offense, this will be the first time former Steeler (for about 20 minutes) Brian Hoyer opens a season as an NFL starting quarterback. The Browns plan to do a "running back by committee" approach, according to Pettine, and they have a pretty good offensive line.  But they have a receiving corps that is questionable, at best, except for Jordan Cameron, who is a very good tight end.

For what it's worth, Vic Carucci on the Browns' website noted, "the last time the Browns began a season in Pittsburgh, 1989, they also had a first-year head coach in Bud Carson. They won, 51-0. "

The last time the Browns beat the Steelers was in 2012, in Cleveland, when they forced eight turnovers on a windy day with Charlie Batch at QB for the Steelers.

The Steelers should win this game, but what do we really know about the 2014 Pittsburgh Steelers? ...  If they don't win this game, at home, look out below.
Posted by Joey Porter’s Pit Bulls at Tuesday, September 02, 2014