This story just keeps getting better and better. 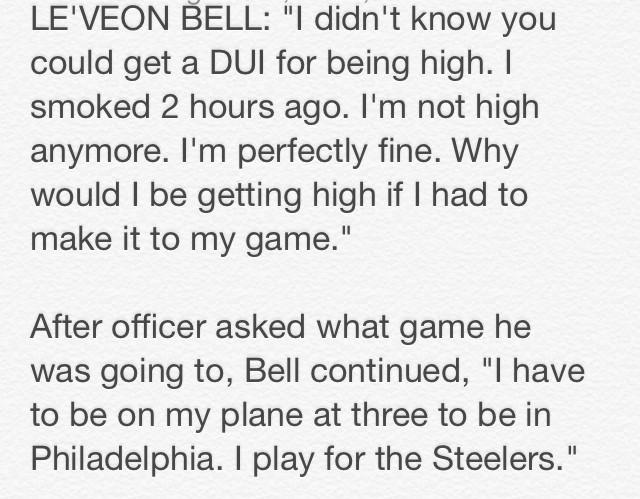 According to the official police report and as reported in various media outlets, including ProFootballTalk.com, the exchange between Bell and the officer continued:


When the officer asked what game he was referring to, Bell replied: “I have to be on a plane at 3 to be in Philadelphia. I play for Steelers.”

Bell initially told the officer there was no marijuana in the car, but when asked if they had smoked any, he replied: “It was about a minute ago,” before clarifying that it could have been within the previous two hours.

As one of the PFT readers commented, "If guys like this had to think in order to breathe, they would have been dead years ago. There’s dumb, and then there’s the level of dumb that just makes you numb to consider."

As a proud citizen of Steeler Nation, it pains Joey Porter's Pit Bulls to write this, but Le'Veon Bell and LeGarrette Blount -- Le'Doobie Bros. -- have made the Steelers the laughingstock of the NFL.