Not totally sold on the corners 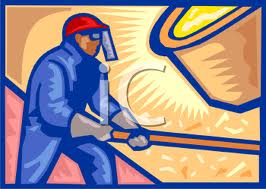 The way the Steelers' defense is set up, the corners must "tackle the catch."

Perhaps more than any other NFL defensive scheme, Dick Lebeau's defense usually has the corners playing off the line of scrimmage, not jamming receivers at the line.

Because the scheme will allow short, quick passes, the corners had damn well better tackle the catch; in other words be right there when the ball arrives and tackle the receiver before he breaks free for significant yards-after-catch (yac) mileage.

Unless it's Denver's Demaryius Thomas catching the ball on a short crossing pattern and going 75 yards on a short pass from Tim Tebow to win a playoff game. Sore spot.

Say what yinz will about Ike Taylor, but generally he's been a solid tackler throughout his 19-year 11-year career.

Joey Porter's Pit Bulls are not totally sold on any of the top corners in this year's draft. The Steelers would either be reaching in a show of faith or settling from somebody they know is solid but limited.

Justin Gilbert: "A Pile Watcher"?
From nearly all reports, Oklahoma State's Justin Gilbert, the top-rated corner in this year's NFL draft is not a solid tackler. He has speed and cover skills, but one NFL scout describer him as a "pile-watcher," and he is known to be a bit of a prima donna, somebody who trots up to the pile after the tackle is already made and strikes an aggressive stance like, "yeah, that's how it's done, punk."

Some people would say, "Deion Sanders didn't tackle either." But can anybody say with absolute conviction that Justin Gilbert is a shutdown/takeaway corner? One thing Gilbert has that the other top corners don't have is the ability to return kicks. But you can also get that from Odell Beckham, our top receiver likely to be available at No. 15.

If Gilbert is available and the Steelers draft him, they would do so knowing he doesn't have a history of tackling with the sort of stick-your-nose-in enthusiasm and skill they require.

Darqueze Dennard: A half-step slow?
Michigan State's Darqueze Dennard, by contrast, does all of that.  He tackles. No problem there.  Many draftniks have said he "looks" like a Steeler. He has swagger and confidence, which is what you want in a corner.

Our concern about Dennard is this: Is he a half-step (or a step) too slow? Does he have recover ability? Does his aggressiveness make him vulnerable to double-moves and mis-direction plays? Does he have enough long speed to keep up with NFL fly patterns and deep posts?  Does he have the quick-burst change-of-direction catch-up speed to close on turn-in routes and out patterns? Will he get burnt? Will his tendency to "grab-and-hold" receivers -- either because he can't run with them or because he's simply aggressive -- draw pass-interference penalties in the NFL?

Kyle Fuller:  Solid, but merely ordinary?
By some accounts, the other top-rated corner, Virginia Tech's Kyle Fuller, is fundamentally sound and has generally good technique. His speed in the short-shuttle and cone drills is better than Dennard's. He is said to be a willing tackler. His coverage skills, instincts and anticipation appear to be solid. The NFL Network's Mike Mayock rates him as the top corner in the draft.  Fuller appears to be solid. But: Is he special? Or, is he just ordinary?

If you're drafting somebody at No. 15 overall, he'd better be special; extraordinary.

He'd better not be Chad Scott.

Help Wanted
The Steelers need help at the cornerback position, that's for sure. With 46 passing plays of 20 yards or more in 2013, including 12 pass plays of 40 yards or more, there is no question drafting a sure-thing, can't miss corner in the draft would make sense.

If only a sure-thing, can't-miss corner were available. Then again, how often is such a player coming out of college ever available?  At No. 15, however, the Steelers can't afford to miss.

And it can take a while for even the best college corners to fine-tune their craft in the NFL. Fans expecting immediate impact at the cornerback position may be disappointed.

Right now, we feel better about Beckham than any of the corners or other receivers.