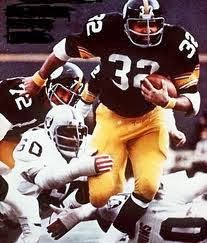 Three of the four teams playing in the NFL Conference Championship games this weekend ranked among the NFL's Top 10 for yardage gained running the ball. They are: San Francisco (No. 3), Seattle (No. 4) and New England (No. 9). The Broncos ranked 15th.

Although the offensive line seemed to improve as the season progressed, the offensive line could never be counted upon to get a reliable push in the run game. That lack of push hampered the Steelers badly on third-down  attempts and in the red zone.

And this all points back to an issue we hate to raise, but ... if Bruce Arians was fired and Todd Haley hired to help the Steelers get back to the run and protect Big Ben, those twin objectives have not been attained.
Posted by Joey Porter’s Pit Bulls at Saturday, January 18, 2014