When healthy, LaMarr Woodley proved he can be a dominant player, a beast, good enough that the Steelers signed him to a $61.5 million contract. 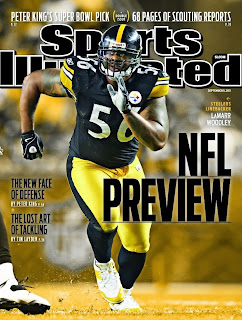 It remains to be seen how long Woodley's latest calf injury (the other calf) will keep him out of the lineup. If it's the rest of the season, he will have missed five games this year.

Woodley missed three games with a hamstring injury in 2012 and six games the year before that.

In the 11 games in which Woodley has appeared this season, he's had five sacks and been in on 36 tackles (20 solo tackles; 16 assists). There were four games in which he had zero tackles.

The Steelers' decision last off-season to move on from James Harrison signaled a changing of the guard in the linebacker corps. After years as one of the great Steelers, Harrison's age and salary conspired against his future employment with the Steelers. Age and salary had caught up previously with outstanding linebackers such as Joey Porter, Jason Gildon and Greg Lloyd.

The same may be happening with LaMarr Woodley. Already.