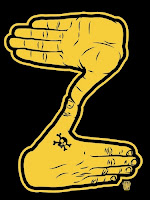 He's in the house, in the person of 27-year-old Zoltan Mesko, the 6'4" Romanian who was waived by the Patriots on Saturday and picked up by the Steelers on Monday..

Zoltan will replace Drew Butler, whom the Steelers unceremoniously booted into unemployment on Labor Day.

The Steelers clearly believe the left-footed Zoltan provides an immediate upgrade over Butler, who was consistently inconsistent. Butler's hang time was less than so-so, he had a tendency to come up short in key situations, and he had a punt blocked last year in Tennessee (and also in this year's first preseason game).  Butler had lost the confidence of the Steelers, who practically begged veteran Brian Moorman to seize the job this training camp.  Moorman failed and Zoltan came available, so the job is his.

Zoltan did a good job during his three years as a Patriot, kicked well during the pre-season and was a favorite of fans and media in New England. The Patriots actually spent a fifth-round draft choice on Mesko in 2010, when The Wall Street Journal of all publications, ran a feature article calling him "The NFL's Most Interesting Man."

Pittsburgh fans will love Zoltan.  He may be from Romania by way of Cleveland and then the University of Michigan, but on Polish Hill, the ladies are already cooking haluski and, in Hungary, they're ecstatic, as you can read in this blog post: Meskó Zoltán Steeler lett (make sure to check the reader comments; they're wildly enthusiastic).

Why did the Patriots let him go? Reportedly it was money -- the Pats went with an undrafted rookie who will make considerably less than the $1.32 million salary that was due Zoltan this year.

A New Cornerback, too
The Steelers also signed 5'8" cornerback Antwon Blake, a 4.2/40  burner with a 39-inch vertical leap who has the look of special teams gunner written all over him (where he's not covered by tatoos).

Blake, who was undrafted out of UTEP, also could get opportunities to return kicks. He made Jacksonville's "final" roster only to be cut a couple days later. He replaces rookie corner Isaiah Green, another undrafted free agent.

The additions of Mesko and Blake make four roster changes since the "final" cuts were announced on Saturday. Additional changes may be in the works.

Now, however, with the addition of Zoltan and Blake, there's every chance the Steelers will win five games instead of three. What?
Posted by Joey Porter’s Pit Bulls at Monday, September 02, 2013