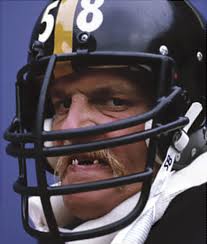 "If I could live my life over, I'd be a football player, and you damn well better believe I'd be a Pittsburgh Steeler!"
-- Jack Lambert, Hall of Famer

Brown has taken a lot of criticism this week both for what he said and how he went about saying it (in public, on ESPN's First Take), but he is absolutely correct, and Joey Porter's Pit Bulls agree it needed to be said -- in public.

Let's get it out there and talk about it. Here's what Brown said:


“We have a lot of young guys. A lot of guys haven’t been around here for the history of this team. I want to make sure guys understand the importance of being here, the tradition and what is required from our peers, coaches and everybody inside this building. You have to know the history of something if you are a part of it. You have to know where it started, where it came from and what it’s about. You know where you are with it now and where you want to go. I can help teach guys about that and take that type of approach. Every man here has to understand the importance of what the Steelers logo stands for, the men that came before us and wore the jersey and we have to understand the importance of it, be humbled by it and work with that mentality.”

Brown is right: The Steelers' need to pull together as a team, and some of the players -- a lot of the players, apparently -- need to better understand what being a Steeler is all about.  It's clear that all too many Steelers last year, especially some of the younger players, do not fully appreciate or even at all comprehend what an honor and a privilege it is to be a Pittsburgh Steeler.

We saw it early in the season, and we're outsiders. We saw it in the games at Denver, Oakland and  Tennessee. It was about then that Joey Porter's Pit Bulls started having this conversation with friends, although we held off writing it until our Steelers' 2013 season post-mortem:


"Too many of the younger players displayed a sense of entitlement. They 'displayed' instead of played. Too many of them -- some of whom have enjoyed occasional flashes of success -- played as if they'd arrived -- when in actuality, they haven't accomplished anything of substance or duration. The perception here is that too many of the 2012 Steelers failed to understand what it takes to succeed consistently in the NFL, let alone what it means to be a Steeler. They seem to have no clue."


"The play of some of these guys suggested that their expectation was that just because they had some modicum of success at major NCAA programs like Georgia Tech (Jonathan Dwyer), Missouri (Ziggy Hood), Florida (Chris Rainey), Texas (Curtis Brown), etcetera, that they would be given a free pass in the NFL. It doesn't work like that, and certainly not in Pittsburgh.

"Just ask retirees Aaron Smith, Hines Ward, James Farrior, Chris Hoke, DeShea Townsend, Jerome Bettis, Alan Faneca, etcetera, and the list goes on and on. This is not to say there was no leadership on the 2012 Steelers: Some of the veteran players like Ryan Clark, Larry Foote, Heath Miller, Brett Keisel, Max Starks and others, no doubt, did what they could. Others probably could have done more.

"Most certainly, however, too many of the young guys just didn't step up their game, and they didn't seem to appreciate what it means to be a Steeler.  Mike Wallace and Rashard Mendenhall come to mind.  Mendenhall quit on the team.  Wallace too often appeared sullen and disinterested. Those two are gone.

"Jonathan Dwyer was given a golden opportunity -- he was handed the starting job at running back -- and fumbled it away, figuratively and literally. Chris Rainey found there is a big difference between the SEC and the NFL." 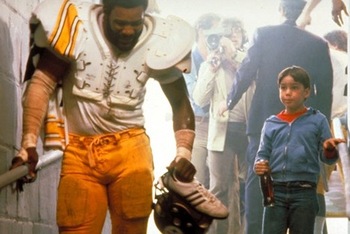 Antonio Brown himself was hampered by injuries, came back probably too soon, and at times his play was sloppy (with fumbles and bonehead plays), so he is not totally blameless for some of the Steelers' losses in 2012.

But let's give him credit for saying what needed to be said. That's a first step. Nobody questions Brown's work ethic, or his heart.  His judgment?  Fair enough; sometimes, yeah, occasionally, it's fair to question Brown's judgment and maturity.

Brown seems to appreciate what it means to be a Pittsburgh Steeler, however, and he's sticking his neck out there in a fledgling attempt to be a leader.  Let's not chop it off.

In this case, nobody should doubt Antonio Brown's passion and his pride in being a Pittsburgh Steeler.
Posted by Joey Porter’s Pit Bulls at Friday, February 22, 2013