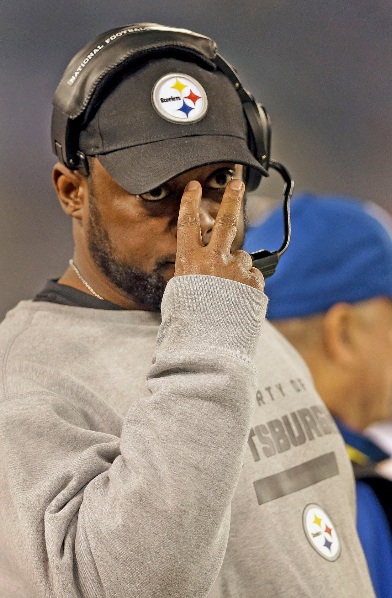 "We live in our hopes, not our fears, with eyes forward."

That's the money quote, as far as we're concerned, from Mike Tomlin's press conference yesterday. Every week, Tomlin  delivers some pithy aphorism than can be entertaining (at the very least); mystifying (occasionally) and even inspiring (sometimes).

Usually, there are a couple such quotes, and we are grateful that he routinely provides so much fodder for frothy discussion. "if you will."  His news conferences are much more entertaining than the ones delivered by most other NFL coaches, including his predecessor.

On Tuesday, Tomlin described the Dallas Cowboys' secondary as "zone-corner capable" and "salty," and we've come to expect such descriptions from him on a regular basis. If anything, we wish he would scale back the effusive praise he lavishes on each week's upcoming opponent. It must be inspiring and motivational for a member of the sucky defensive corps of the Raiders, say, or the Titans, Chiefs, Eagles or Cowboys to get such praise. You can just see some of these guys singled out by Tomlin saying to themselves, "Hey, maybe I'm not such a lousy, underachieving slug, after all. From what Tomlin says, I am salty, grimy and 'coverage-tackle capable.'"

After all, "There is a fine line in this league between squashing grapes and drinking fine wine," as Tomlin famously said last year.  Let's hope the Steelers are done being grape-squashers and, for that matter, getting squashed like over-ripe grapes.