Unfortunately, the Steelers' defense this year just isn't very good, and on offense, the Black 'n Gold settled for two field goals when touchdowns were needed to put some space between them and the Iggles.  The sloppy Steelers let the Eagles hang around and hang around, much like they did in Oakland last game, and the Philadelphians made a game of it. 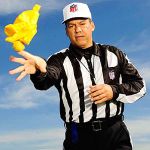 The Steelers' nine penalties had more than a little to do with that, of course, so, Steelers, here's some advice: Enough with the penalties already!  You're not a good enough team to give away first downs and well more than a football field's length in yardage.  Willie Colon?  Four holding calls?  Thanks for nuthin'.

Thank goodness Antonio Brown had a stellar game.  He ate up All-Money Cornerback Nnamdi Asomugah all day.  Rashard Mendenhall looked strong, nimble and sharp in his first game back from a torn ACL suffered only nine months ago.  Welcome back, Rashard.  And kudos to Lawrence Timmons for finally showing up and having his best game of the season, by far.

Lamarr Woodley injured his hamstring (not good), and Troy Polamalu aggravated his calf injury (not good).

A win is a win.  Having said that, the Steelers haven't proven they're very good this year.  This team looks ordinary team, at best.

A good defense does not allow a fourth-quarter, 17-play, 79-yard drive with two fourth-down conversions, taking more than eight minutes and culminating in a lead-squandering touchdown.

We're happy the Steelers got the win, but we're not satisfied.  Then again, it could be worse:  Just look at Eagles' fans.