A team of PIttsburgh's caliber? 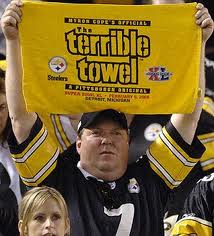 It's too early in the NFL season for "measuring stick" games.

It's just a bit surprising that talk out of the New York locker room indicates some of the Jets' players see today's game in Pittsburgh as a measuring stick  -- an opportunity to validate the quality of their team.

Then again, nothing the Jets say or do should surprise anyone.  It's been a circus there for years, especially since the arrival of head coach Rex Ryan, GQ cover boy Mark Sanzhez, hyperkinetic former Steeler Santonio Holmes, and especially exponentially more so since the arrival of quarterback Tim Tebow as celebrity-sensation-lightning-rod for media blather, social media speculation and talking-head froth.

Amid the non-stop, frenzied speculation about whether Sanchez or Tebow should be the starting quarterback, the Jets produced exactly one touchdown during the four preseason games -- and that was engineered by the third-string QB, Mark somebody-or-other.  In the aftermath of the Jets' 48-24 demolition of the Buffalo Bills last week in the season opener, some of the New York players themselves sound unsure what kind of team the Jets have. 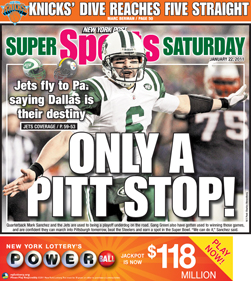 "That's why we're so excited to come out and play a team of Pittsburgh's caliber," said Marcus Dixon, defensive tackle to Mark Cannizzaro of The New York Post.  "So we can show everybody that, 'Yeah, the Jets are ready this year,' and we ain't your show pony and we ain't your circus.'"

Inherent in Dixon's statement, however, is the assumption that "a team of Pittsburgh 's caliber" implies the Steelers are a good team this year.  Do we really know?

It's too early in the NFL season for a "measuring stick" game.  For the Steelers, however, it's not too soon for a must-win game.  Yeah, we're saying it:  Must-win.  The Steelers lose today, and it won't be long before we're looking at playoff tie-breaker formulas and all that crap.

Today, when the Jets bring their circus to town, we will see some measure of just "what caliber" team the Steelers have.  Will the Steelers make Gang Green their show pony?  We shall see.

One thing we do know:  After today, the season will be 12.5 percent over.  If the Steelers are sleepwalking, it's not too soon to yell, "Wake up!"

Out of the Fire: Kirby Wilson, Fighting Back


If the Steelers do need a wake-up call and an inspiration, they need look no further than their own sideline.

Welcome back, Kirby Wilson, the Steelers' running backs coach who returns to the Heinz field sidelines today after nearly dying in a house fire last January.

Wilson suffered severe burns over half his body in a fire at his home in Cranberry Township just a few days before the Steelers lost to Denver in the AFC playoffs.

Following the fire, doctors put Wilson into an induced coma.  At the time, one doctor said he thought Wilson would lose at least parts of both his feet and might have to undergo an amputation below the knee.  Since then, Wilson has had to undergo grueling, excruciating physical therapy and burn recovery.  He's had to learn how to make a fist.  He's had to learn how to walk.

ESPN TV did a nice feature today on Wilson, and his return is right there as an inspiration to anybody who needs a reminder that every second is a gift.

Weclome back, Mr. Wilson, and a salute to you.  Joey Porter's Pit Bulls wish you all the best for continued success in recovery and healing.
Posted by Joey Porter’s Pit Bulls at Sunday, September 16, 2012