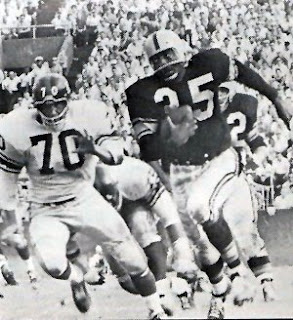 In Sunday's edition of the Post-Gazette, Ed Bouchette offered the following tidbit about the Steelers' running game:

That's interesting, even if we don't know what it signifies, if anything. One thing for sure: Those stats cannot be dismissed as a "small sample size."

As noted here shortly after Super Bowl XLV, although Joey Porter’s Pit Bulls were uncharacteristically sanguine about the game, one question still bristles in the “woulda, shoulda, coulda” department. And that is, why did the Steelers seem to take so long to even try to run the ball on consecutive plays? … against the league’s 18th-rated defense???

Yeah, the Packers won. The Packers played the better game. The Steelers lost. Blah, blah. The Steelers made too many mistakes, including (maybe especially) Mendenhall’s fumble on, yes, a running play.

Still … you can’t help but wonder, what if the Steelers had tried to run the ball consistently, emphatically, from the get-go. Woulda, coulda, shoulda.

We’re mostly over the loss, but it still rankles. We’re still wondering what might have been, and we’re still haunted by that one play that never did happen on that last, desperate drive (and, by that time, forget about the run).

One such useless, wayward thought occurred last night while watching a bit of the NFL Network’s “Greatest Games” program, this one featuring the classic playoff game between the Miami Dolphins of Dan Marino and the San Diego Chargers of Dan Fouts in the 1980s. Among the many highlights of that game, one still stands out:

The Dolphins resorted to an old playground trick, the hook-and-ladder, to spring one startling, totally inspired touchdown that made you sit up and take notice and, yes, we can’t help but wonder … “Damn! That worked beautifully. What if the Steelers had tried the hook-and-ladder on that last drive? It coulda worked. Yeah, suuure …”

Coulda, shoulda, woulda. Just like trying to establish the run.

Time to move forward. The NFL Scouting Combine starts on Thursday, and that will be an interesting diversion for a few days, and then the draft (we’re assuming there will be some sort of collective bargaining agreement and a 2011 season).

As for the Super Bowl, we’re over it. Mostly.

As Charles Barkley once said, “If ifs and buts were beer and nuts, we’d have a hell of a party!”

Note: The above photo of John Henry Johnson is courtesy of this site, UK Black and Gold, which states that it appeared originally in a Steelers game program for a match-up at Pitt Stadium vs. the Cleveland Browns, Oct. 28, 1962. Joey Porter’s Pit Bulls have no particular reason for including this photo, other than we like it ... and, possibly, to suggest that, yes, lest we forget, the running game in today's NFL still can be dangerous -- kind of like running running with scissors.