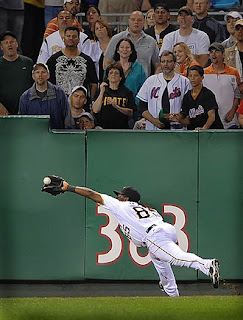 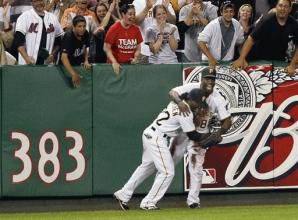 Well, that was entertaining!

Lastings Milledge made what the San Francisco Chronicle's Henry Schulman described as "one of the best game-ending catches in recent memory" to save a 6-3 Pirates win over the Giants before a Fireworks Night sellout crowd at PNC Park.

Writing in this morning's Chronicle, Schulman sets the scene ...

"Down 6-0 after four innings and 6-2 entering the ninth, the Giants scored against closer Octavio Dotel on a two-out single by Andres Torres and had the bases loaded when Freddy Sanchez blasted a drive over left fielder Lastings Milledge's head.

"Had it fallen behind Milledge, three runs would have scored to tie the game 6-6.

"However, in one of the best game-ending catches in recent memory, Milledge dived at the wall and snagged it."

For a moment, Milledge was clearly unsure whether he'd caught Sanchez's drive, which tailed away from him as he lunged with a diving, backhand stab at the ball -- which snow-coned from the top of the glove for a split-second.

Sprawled flat on his belly across the warning track, Milledge checked his glove, flashed a triumphant grin toward the infield -- and pulled the ball free to hold it aloft with his right hand, as if to say. "Look what I found!"

For all that, Milledge stole the show. His catch was the No. 1 "Play of the Day" on ESPN's SportsCenter, it was the brightest moment in recent Pirates' history, and it sent the sellout crowd home happy. No wisecracks, please. Yeah, the Pirates almost blew a four-run lead for the second consecutive night. Yeah, so Milledge took a typically unsteady and somewhat ciruitous route to the ball before diving to catch it. Yeah, whatever.