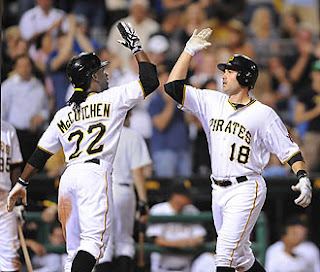 Neil Walker is a breath of fresh air. Let's hope he keeps it going.

Walker is still learning to play second base, but he sure looks comfortable at the plate, with last night's eighth-inning game-winning homer in the eighth inning being just the latest example.

Perhaps the most successful catcher-to-second baseman conversion project was Craig Biggio. It's too soon to start making those comparisons, but so far, so good, except for that new mustache Walker is sporting. He should shave.

Walker's on-field performance, though, is encouraging, as Dejan Kovacevic noted by today's Post-Gazette ...

"If it were an isolated swing, it would ring so much more hollow than the reality: Walker is batting .312 in his eight games since being recalled from Class AAA Indianapolis, including four doubles and now the home run. He has been good enough that it took a week for management to reverse course on a plan to use him in a "corner-utility role," as general manager Neal Huntington had called it, and supplant a $4.85 million second baseman in Aki Iwamura.

"It appears to be a vital part of the Pirates' future."

You gotta feel good for him. Walker's produced and has injected some much-needed life into the team and, yes, its fan base.

As for the rest of last night's game, it could easily have had a different ending, due to yet another edition of "Pirates Base-running Follies". I haven't heard or read anything from the third-base coach on the absurd Milledge-Karstens base-running debacle.

Although it was hit to left-center, the ball Milledge hit had "triple" written all over it once it got past the center fielder. On the other hand, the play was in front of him all the way, as he approached second and the ball was in left-center. Fundamentals, my friend.

Soriano hustled to the ball and launched a nice, quick-release throw directly to the cut-off man, who fired a perfect strike to third. Maybe it's not Milledge's fault -- or anybody's fault, really -- except, the Cubs executed perfectly. Too bad, however, that we didn't have the benefit of a camera tracking Milledge rounding the bases from the batter's box all the way to third.

Maybe Milledge is just a slow runner. Could be. My impression has been that he has average to above-average speed for a major league outfielder. On the other hand, I've seen instances of him trying to to get to balls in the outfield, and it seems like he never out-runs a ball ... nor did he outrun that throw last night. As a pure sprinter, Cutch he ain't, but that might be too much to ask. He might just be slow afoot. One less tool in the so-called five tools toolbox, and he's already missing about three of those ballyhooed tools.

Walker bailed 'em out, though, so all's well that ends well.