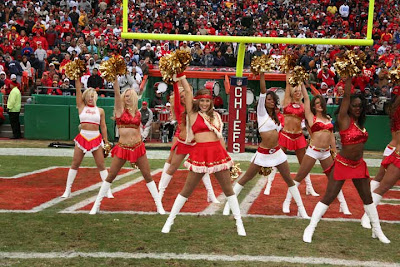 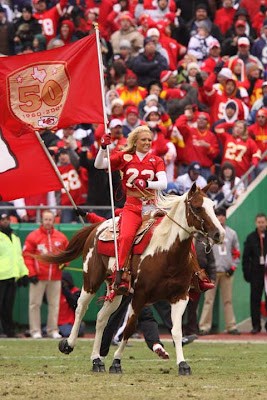 With just four wins in their last 34 games, the Chiefs have been floundering in recent years. To say they've been one of the worst teams in the NFL may be an understatement. They're right there with fellow bottom-feeders, the Raiders, Rams, Buccaneers, Bills and Browns.

It's sad, really. From what I understand, however, at least Kansas City has enthusiastic fans, good tailgate parties and attention-diverting cheerleaders.

Other than that, the team's ongoing state of near-total disarray continued even into this week, with the suspension of Dwayne Bowe, the Chiefs' leading receiver, because of a positive test for Performance Enhancing Drugs (or a banned masking agent, at the very least).

This came on the heels of the long-simmering Larry Johnson debacle. The Chiefs cut Johnson last week, after years of acrimony, turmoil and controversy. Johnson, who was within a few dozen yards of establishing the Kansas City's all-time rushing record, was unceremoniously cut and then picked up this week by the Cincinnati Bengals, who tell him he'll run with the scout team as the fourth-string running back. Yeah, good luck with that, Marvin Lewis.

While we're wishing luck, we can wish some (after Sunday's game with the Steelers) to Kansas City head coach Todd Haley, a Pittsburgh native and son of longtime Steelers' souting honcho, Dick Haley, a legendary scout who was instrumental in helping to find talent for Pittsburgh's Super Steelers dynasty of the 1970s.

Todd Haley was offensive coordinator for the Arizona Cardinals during February's Super Bowl won by the Steelers. Based on that experience, plus his history, one would think Todd Haley has some knowledge of how the Steelers do things. We presume, too, that he has had this game circled on his calendar as one that he desperately wants to win -- to put a stake in the ground and a feather in his cap.

There is some talent on the roster: On defense, there's Mike Vrabel, Tamba Hali, Tyson Jackson, Glenn Dorsey and Mike Brown; on offense, Branden Albert, Chris Chambers, Matt Cassell and Jamaal Charles. Still, there are way, way too many question marks, even for the aforementioned players.

It could be worse: They could be the Cleveland Browns.
Posted by Joey Porter’s Pit Bulls at Thursday, November 19, 2009