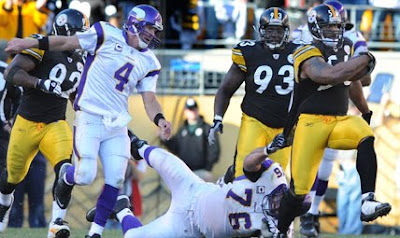 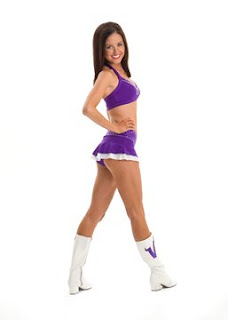 Lots of swing shifts in momentum in this game. Lots to discuss, so let's get right to all the non-sequential non-sequiturs.
Hmmm ... yeah, Limas Sweed, inactive again.
Not a good sign for him. Keenan Lewis, too.
Looks like Tony Hills ain't gonna make it, ever.

To tell you the truth, though, if I were Sonny Harris (not Sunny, as spelled above, by the Steelers), I'd be a bit perturbed and disturbed. And pissed.
Photo Credit: TribLive.com showing Lamarr Woodley's game-changing return for a touchdown
Posted by Joey Porter’s Pit Bulls at Monday, October 26, 2009

You be nice to Jeff Dugan. I went to college with his father (who is also my father's golfing partner).
Also a good friend of my nephew's.

That nice boy did us a huge favor.....Poor thing!

Why should I be nice to him? He went from one Vikings team (the Central Catholic Vikings) to another (the Minnesota Vikings).