Mistakes by the Lake 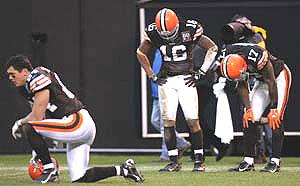 For the Steelers, more special teams gaffes, another interception returned for a touchdown, costly penalties once again ... hell.

And Joey Porter got punk'd, by Kellen Winslow II (Jr.?), the soldier. At this point, the less said, the better.

Hines Ward and Big Ben: Tough guys. And Clutch Willie Parker. Snatching victory from the Dawg Pound Jaws of Defeat. Still, this one was fugly.

Oh, and Braylon Edwards, regarding your pre-game statement:
"You don't beat somebody 41-0 at their own house."
Uh, yeah, well, actually they did. And the Steelers just beat you again, 24-20, with you flailing at the ball in the end zone on the last play of the first half and at the end of the game. Fool. And your Michigan Wooferines team lost to The Ohio State University over the weekend, too. Loser.