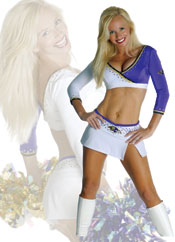 Okay, let’s get this straight: ’s defense can be exploited.

The question is, “Do the Steelers have the personnel (wide receivers) and schemes (spread offense) to do it?”

And the answer is, “Yes”

Attack, that is, repeatedly and aggressively, and once again, the answer should be, “Yes.”

The Ravens’ defense was constructed specifically to defeat the Steelers … the Steelers of the Jerome Bettis era, that is.

The Ravens defense is built from the inside out, with two brutes in the middle up front, and other talented personnel: Adalius Thomas is a major force at linebacker; Trevor Pryce and Terrell Suggs are speed rushers (and the Steelers have had problems with that type of pass rusher); Bart Scott has emerged as a fine player; Chris McAllister is a an opportunistic ball hawk at corner and Ed Reed is arguably the second-best safety in the league, behind a certain individual of Samoan descent.

Still. It used to be that the way to beat the Ravens was to run right at Ray Lewis, who is a thug but a punk, too.

However, this year’s Steelers offense, like it or not, is a speed offense.

So they might as well use it, as they did in the fourth quarter at .

The Steelers can win this game, if they don’t let the Ravens’ defense dictate the tempo and tone of the game. The Steelers can and should use quick counts, short drops and rollouts to keep the Ravens off-balance by torturing their weak spot, which is a lack of depth in the secondary, and one particular cornerback who is well past his prime — Samari Rolle. This could be a breakout game for Santonio Holmes. Just sayin’.

Let’s not overlook something, though. This game may well hinge on special teams, and, with B.J. Sams, the Ravens have one of the best return men in the league. The Steelers have to figure out a way to snuff punt and kickoff returns. Hey! Jeff Reed! Chris Gardocki! Coverage and return teams! Get your axe together!

When the Ravens have the ball, expect to see a lot of Steve McNair to Derrick Mason and Todd Heap, both of whom are fine receivers. But the Steelers’ defense should be able to contain the offense, which has been performing better lately, since Brian Billick took over play-calling duties. As painful as that is to admit.

And therein lays hope. Joey Porter’s Pit Bulls have every reasonable expectation that Brian Billick, the offensive genius, will outsmart himself on Sunday. We don’t know how, when or in what way he’ll do it … but we fully expect him to outsmart himself.

The Steelers will win this game.

Oh, and one other thing: This is our country. Congratulations.